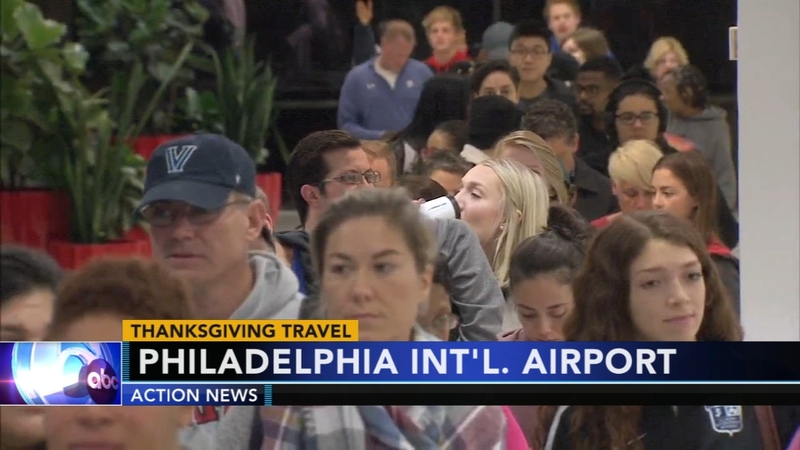 Heading out by plane

PHILADELPHIA (WPVI) -- By trains, by planes and by automobiles, residents of the Delaware and Lehigh Valleys are heading out for the holidays.

Traffic was heavier than usual on Wednesday, too.
AAA said people from our area are expected to be traveling in record numbers, numbers that we have not seen since 2005.

"That translates to over 600,000 locals who will travel 50 miles and about 90 percent of those-530 thousand-will be going by car," said Jana Tidwell, of AAA. "So all the roadways, highways and byways will be crowded."

Many others are traveling by plane.

They got an early start at Philadelphia International Airport. Long lines stretched across the terminal just before the first flights took off.

"Already this morning we are seeing longer lines to get through and TSA than we saw last year," AAA spokesperson Jana Tidwell.

The lines came as no surprise to travel experts, who predict a 3 percent increase in air travel this year, mostly due to consumer confidence.

Airports fill up with holiday travelers: Jeannette Reyes reports during Action News at 5:30 a.m. on November 22, 2017.

"We are seeing the highest Thanksgiving travel volume in 12 years in part due to the fact that airfares are considerable lower for the Thanksgiving holidays than they were," said Tidwell.

Even those who arrived early were a little anxious ahead of their flights. Amy Donnella and her daughter, Lea, both of Queen Village, were going to L.A. to be with family for Thanksgiving.

"It's a long line," she said. "This is an incredibly long line. We are just hoping we can get through it before our flight."

Suprena Marks, of Northern Liberties, was headed to Atlanta for a special reunion

"My cousin just returned from Afghanistan, and I'm going to surprise her," she told Action News.

"Liquid aerosols and gels... we have a requirement 3.4 ounces or less, and that you put that stuff in a bag and that you divest it," he said. "If you don't do that, it has to come back out and be put in a bin."

Still others were traveling by train. At 30th Street Station there were long lines and delays.

But why is this a record year for holiday travel?

"The economy," said Tidwell. We're seeing a strong economy, and we're seeing a rebounding labor market. That means an increase in paychecks and increases in consumer confidence and people are willing to spend their money on holiday travel."