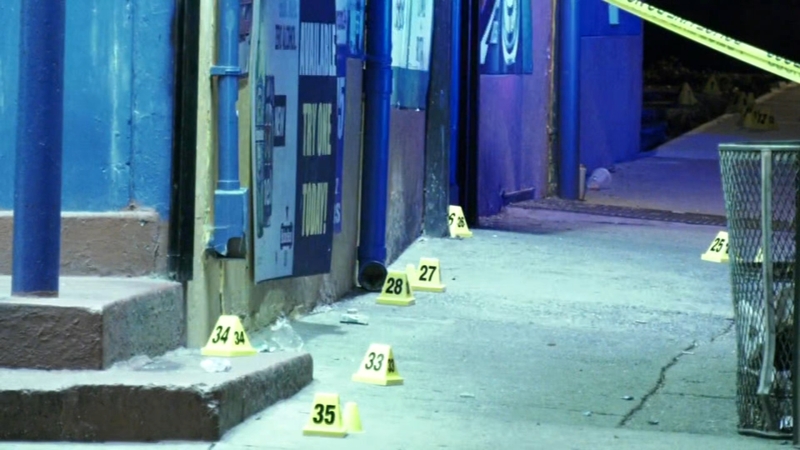 TRENTON, N.J. (WPVI) -- A total of ten people were shot and wounded after gunfire erupted near a bar early Saturday morning in Trenton, New Jersey.

The shooting happened around 12:30 a.m. in the 300 block of Brunswick Avenue.

Officials say they believe two suspects fired 30 shots into a crowd of victims between the ages of 21 and 36 years old.

The victims include five men and five women. Two of the men are in critical condition.
Luckily, no one was killed.

As far as a motive goes, officials say witnesses have said multiple things.

That the shooting was caused by a road rage incident, to a gang rivalry.

Trenton Police Director Sheilah Coley said, "The truth of the matter is we just don't know at this point."

Police are looking for a dark-colored SUV connected to the incident. There have been no arrests and no word on the identity of any suspect or suspects.

A city councilman was outraged over the violence.

"Every time we get a break in the weather, a few in this city want to engage in gunplay. And I know that the police are working hard, they're working so hard to address this crime wave, but they need more resources," said Councilman Jerell Blakeley.
"I call on the state troopers, I call on the National Guard. We need something in this city," Blakeley continued.

At a news conference, Trenton Mayor Reed Gusciora said things aren't as bad as they seem.

"Violent crime is down in the City of Trenton. It is the celebrated cases that unfortunately give us the perception that things have fallen apart," he said.

This is the second shooting in Trenton in less than a year that has injured multiple people.

Nearly 30 people were hurt in a shooting at the Art All Night Festival last June.