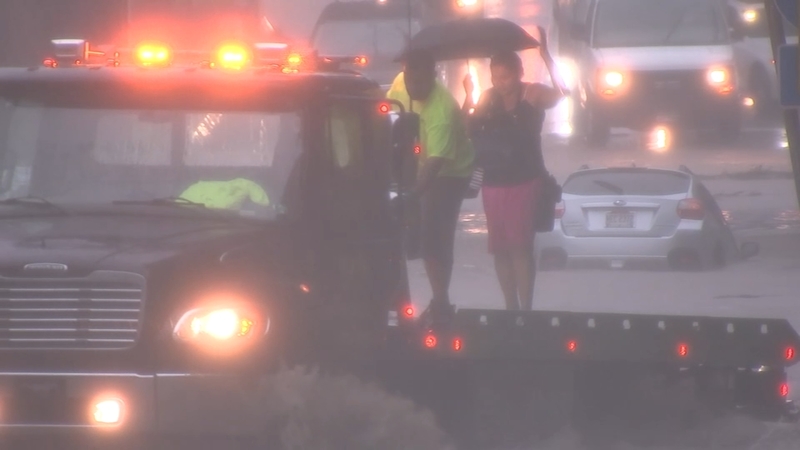 BELMONT HILLS, Pennsylvania (WPVI) -- The heavy rain dumped on the region by Tropical Storm Isaias on led to flooding across the area, including a busy intersection just off the Schuylkill Expressway.

It looked like river rapids as water gushed down Belmont Avenue at the ramps to I-76 around midday Tuesday.

"In about two minutes, the water just came out of the drainpipe up there and flooded the entire area, and was about three feet high," said Jerry DeFrancesco of Bala Motor Sports, a nearby business.

People trapped by floodwaters are rescued in Belmont Hills, Pa.

"The water got so high up. I just came around and said, 'look, I can rescue them because it's getting too crazy,'" Ortiz said.

Soon, Lower Merion firefighters arrived and moved as a team across the engulfed Belmont Avenue. They brought another driver and one of Ortiz's co-workers to safety.

"I work in the office. I saw the water coming high, so that's when I told myself 'I gotta get out of there,'" said Bala Motor Sports employee Maria Oyola.

Cleanup at Belmont and I76 where two cars stranded from flooding. Road should be open in a couple hours. pic.twitter.com/Tx6RaX6Vev

"They were just terrified. It's crazy because in a matter of seconds if you don't have your windows down you can suffocate, but we got them out so that's all that matters," said Ortiz.

The cleanup followed and Belmont was reopened around 3 p.m. Fortunately, everyone involved was ok.

The Action Cam was in Darby, Pa. where water rose above cars, and the doorways of homes.

Rescuers were seen bringing two children to dry land there.

Crews work to rescue people on a roof from the floodwaters in Darby, Pa.

Firefighters used a boat rescued two people from the vehicles.

In Doylestown, Bucks County, the high winds caused damage to Doylestown Hospital, partially tearing the roof off the Children's Village day care. County officials said there were no reports of serious injuries.