Everything is double, tripled, and the diesel prices for us on the farm are super impactful," said farmer John McConaughy.
WPVI
By Dann Cuellar and 6abc Digital Staff 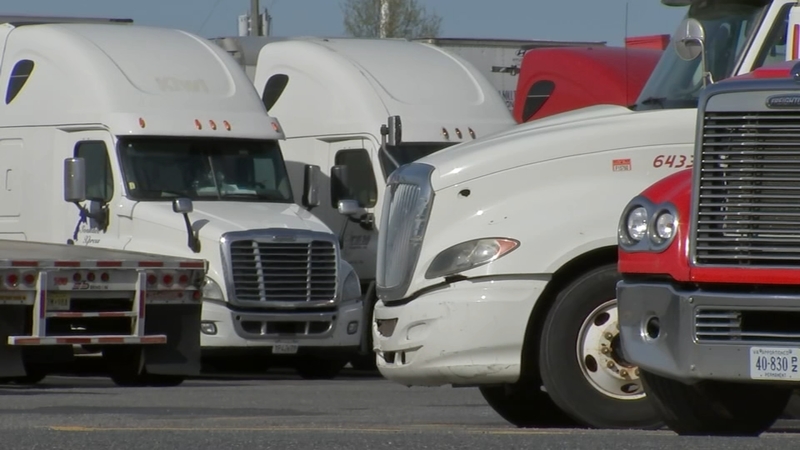 PHILADELPHIA (WPVI) -- The trucking industry that delivers food and supplies to stores across the country says they are being hit hard by surging diesel prices.

And some of the smaller operators say it may ultimately put some of them out of business.

"It's just been tough, it's been very tough," said Ken Weal, an independent trucker from the Germantown section of Philadelphia.

Weal says what it's costing him to fill up his 200 gallon diesel tank on his tractor trailer rig, compared to a year ago, is hitting him hard.

According to TheTrucker.com, diesel prices have more than doubled in two years, rising from $2.48 a gallon in April of 2020 to $5.10 this week.

"About 28% of that is coming from the Russian war in Ukraine. But it's been rising for the last year," said Cliff Abbott of TheTrucker.com.

Many independent truckers are like Eric Gambrell from New York State.

"I pretty much live out of my rig, so my bottom line is, this gas price as it goes up, my cost of living goes up," said Gambrell.

Some say they've been trying to eat the costs to stay competitive.

But some drivers operating company driven trucks say the costs of delivering goods will ultimately be passed on to the merchants then impact the customers.

"If it costs more getting there, of course the stores are going to charge you guys more," said Joshua America from Westmoreland, New York.

"The end game pricing is all affected because it's raising the transportation costs all across the country," said Heller.

"It's not just diesel, animal feed, everything is double, tripled, and the diesel prices for us on the farm are super impactful," said McConaughy.

There could be some short term relief after President Biden ordered using the country's emergency oil reserves within the next six months and a number of states lifting the gas tax, but that's only temporary.