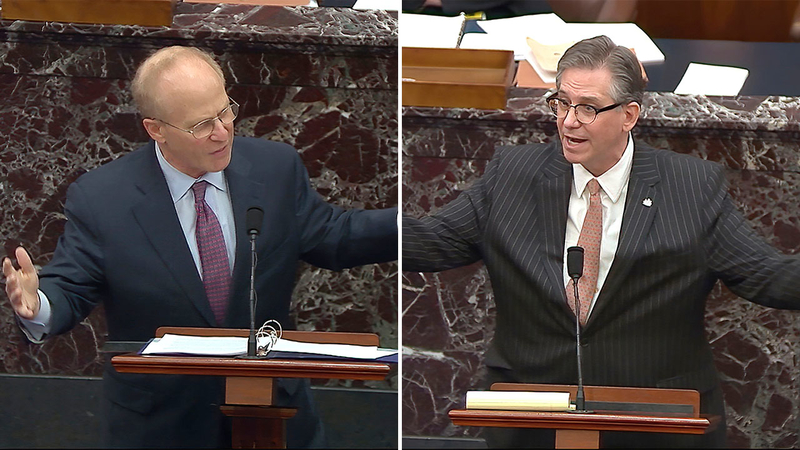 His lawyers will take the Senate floor on Friday after impeachment managers wrap up on Thursday, but they are not currently expected to use all of their allotted time. Each side gets 16 hours for presentations.

Attorneys David Schoen, Bruce Castor, Michael van der Veen and William Brennan are all expected to speak during Friday's arguments, according to a person familiar with the latest plan. Using videos of Democratic lawmakers, they plan to argue that Democrats glorified violence by recreating the January 6 riot, will claim the trial is unconstitutional and stress Trump's First Amendment rights.

Because the legal team is so disorganized, Trump's allies are apprehensive about how the defense will go. Trump erupted Tuesday as Castor made a meandering opening argument during which he praised the prosecutors.

In opening remarks Tuesday, lawyer Bruce Castor said: "The American people are smart enough to pick a new administration if they don't like the old one. And they just did."

Several of Trump's allies lobbied him to get rid of Castor that day, which Trump briefly considered, according to two people. Trump was upset as he watched multiple people, including his usual allies on Fox News, trash Castor's performance. But Castor has remained on the team and is expected to present, at least in part, on Friday. He has told people he wasn't planning on speaking Tuesday, which led to the muddled speech. Castor also admitted on the Senate floor that he swapped speaking roles with David Schoen because Democrats presented such a strong opening argument.

Allies reassured the angry former president by reminding him he's still headed toward acquittal. President Joe Biden told reporters he thought grim new footage presented Wednesday could have changed the minds of some senators, but conceded, "I don't know."

Though Castor was supposed to lead the defense, as CNN reported, that's now expected to be Schoen, who has said he will not participate in the proceedings during the Sabbath. Trump's team believes they will likely wrap up their arguments by then.