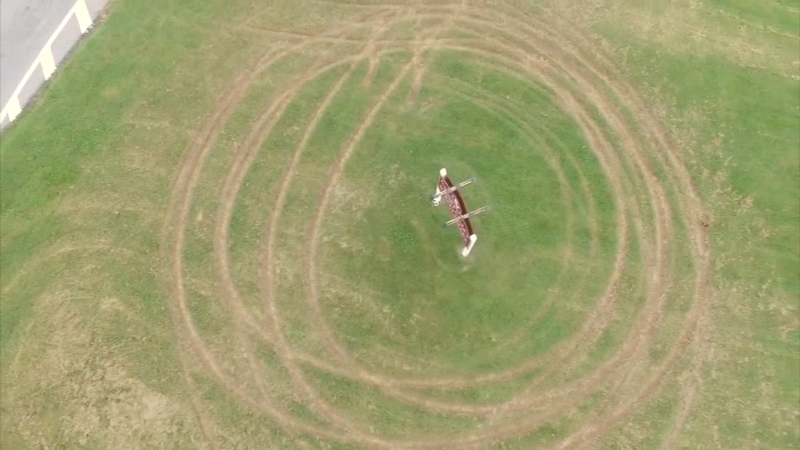 GLEN MILLS, Pa. (WPVI) -- The search continues for the driver who used a pickup truck to damage several locations on or near Garnet Valley Middle School property.

The school district released several videos of the incident. It's called "turfing," in which a vehicle is sharply turned to make crude circles - or "donuts" - with the goal of ripping up green space.

The video shows the vandalism happening at about 3 a.m. Sunday.

"We have the administration working on it. They have a list of names forwarded to state police. The state police are following up on those leads so I am pretty confident they are going to find this person. There's just not a lot of those kinds of vehicles in our area," said Superintendent Dr. Marc Bertrando.

Besides the video, there are clues apparently in the tracks left behind that indicate the truck's width and length.

On Monday, workers were mowing the damaged areas. Soon, others will fill the gouges with topsoil and seed.

Janet Margraf, who was playing with her grandchild at an adjacent park, said the truck driver's actions were senseless.

"It's vandalism, first of all. No reason for it, I am sure. Someone was just joyriding, thinking it was amusing, but it's not," she said.

A similar incident occurred last year, in which someone heavily damaged a field hockey and lacrosse field.

It was restored and heavy a vehicle barrier put in place at a cost of about $20,000.

As for Sunday's incident the, superintendent says the district intends to recoup the $5,000 or more it will take to put things right from the person responsible.

"We are hoping this individual turns himself in and hopefully that helps to mitigate some of the consequences that he or she might face," said Bertrando.