Pysanky by Basia: Saving the world one Ukrainian Easter egg at a time. 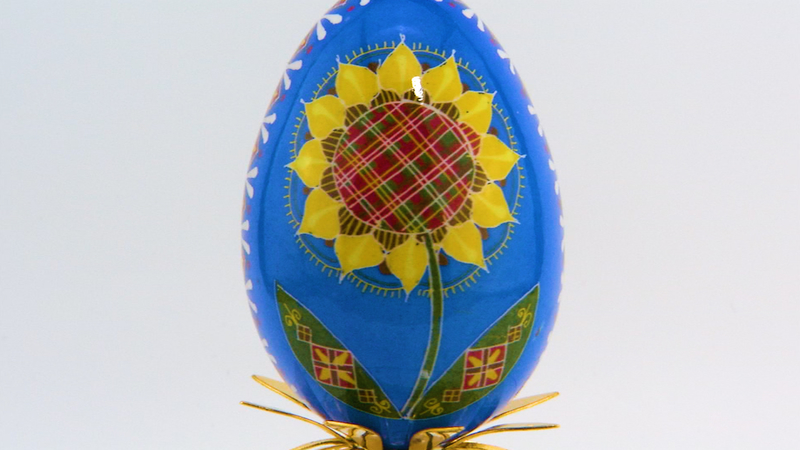 Pysanky by Basia: Saving the world one Ukrainian Easter egg at a time.

YARDLEY, Pa -- Basia Andrusko has been writing Pysanky since she was a child, etching ornate designs on everything from chicken, finch and quail eggs to ostrich, emu and rhea eggs.

Pysaty comes from the word pysat, which means to write. Pysanky is the plural form of the word, and Basia describes it as almost like hieroglyphics.

A sheaf of wheat, for example, stands for prosperity and bountifulness; horses or rams stand for strength. The color blue stands for good health and white for purity.

She makes Pysanky jewelry and holds classes, teaching others the more than 2000-year-old tradition.

When Christianity was adopted in Ukraine in 988, Pysanky became part of the Easter tradition with the eggs in Easter baskets.

Basia says Pysanky were considered good luck charms and the art was passed down through the generations.

A single egg can take her anywhere from 30 minutes to 50 hours, depending on the size of the egg and the intricacy of the design.

She says legend holds that there's a monster chained to a cliff somewhere in western Ukraine. When there are many eggs that are written that year, his chains will tighten up and goodwill prevails over evil for one more year. And so, she says, everyone who writes Pysanky is saving the world one egg at a time.