Ukrainian officials said the bodies of 410 civilians were found in Kyiv-area towns that were recently retaken from Russian forces.
WPVI
By Jaclyn Lee 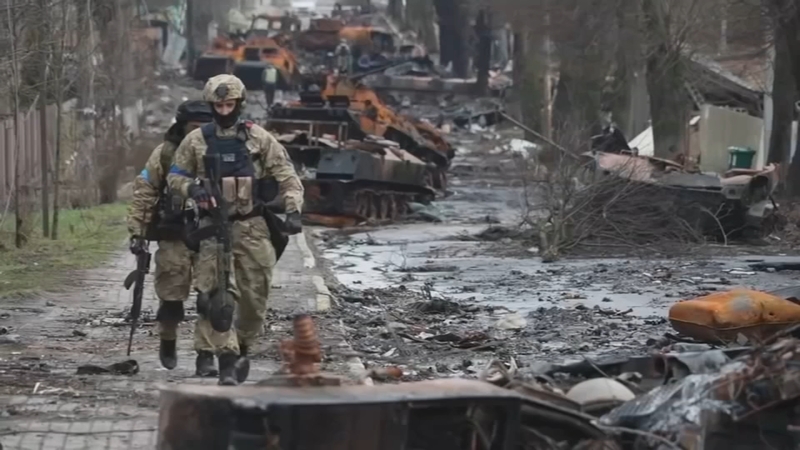 PHILADELPHIA (WPVI) -- Bodies with bound hands, close-range gunshot wounds and signs of torture lay scattered in a city on the outskirts of Kyiv after Russian soldiers withdrew from the area. Ukrainian authorities accused the departing forces on Sunday of committing war crimes and leaving behind a "scene from a horror movie."

As images of the bodies emerged from Bucha, European leaders condemned the atrocities and called for tougher sanctions against Moscow.

Ukrainian officials said the bodies of 410 civilians were found in Kyiv-area towns that were recently retaken from Russian forces.

Residents in the Philadelphia region are reacting to the horrifying images.

"What happened in Bucha is just the ultimate, to date, sign of the level of devastation," said Gene Luciw, president of the Philadelphia Branch of Ukrainian Congress Committee. "We are outraged. I've been polite, but I think it's time that the Western world take this seriously because we are defending the world."

Those who escaped the war are recounting the horrors they lived through.

Two refugees arrived in Philadelphia last week. They walked nearly 450 miles from the Ukrainian capital of Kyiv to Warsaw, Poland to find safety.

Their arrival was made possible through visas issued by the U.S. Embassy in Warsaw, and more refugees are expected in the coming weeks.

Luciw said the best thing people can do to help Ukrainians is to contact their local politicians and ask for the U.S. to further support Ukraine.