WPVI
By Nydia Han and Heather Grubola
PHILADELPHIA (WPVI) -- The Troubleshooters are investigating a big name roofing company that has locations in Northeast Philadelphia and North Wildwood, New Jersey.

"I would not recommend them to anyone," she said.

Because according to Tompkins' lawsuit, just weeks after Union Roofing did the work, rain started coming in at the same spot.

"When I heard that drip drip, I said I know it's not leaking again all that money I just paid," she said.

"So when the judge got to me, I told my story. I said I felt as though he took advantage of me," she said.

Last year, Migdalia Arroya and Janice Johnson hired Union Roofing to fix leaks at their homes, too. Johnson said her issue was over her porch but the company persuaded her to also get a skylight fixed.

"I trusted that to them and they took advantage of it," said Johnson.

She said after paying more than $6,000, the roof over her porch still leaks and the company is now telling Johnson and her family they need to pay for new siding.

"We're not spending an extra $3,800 because you guys misdiagnosed what was the problem in the first place," said Terence Branson, Johnson's son.

"They stripped me of the little money that I had for myself," said Johson.

Arroya told the Troubleshooters after paying $750, her leak wasn't fixed either.

"I was almost in tears because I don't have a lot of money and for a lot of people it's not a large sum but for me it was," she said.

The Troubleshooters tried to talk to the company owner in person but Frank Lubisky did not come out of his office to speak to us. The company did email and said it stands by the work at the Johnson home and the problem is with her 50-year-old siding.

Union Roofing said Tompkins also needed additional siding and informed her of this prior to the work it completed, which was its original defense in court.

After being contacted by the Troubleshooters, the business acknowledged Arroya's leak wasn't fixed and gave her a full refund.

"I want to say thank you and continue to do what you're doing because you're helping more people than you think you are. You really are," said Arroya.

Tompkins won her case in court and received a check for $2,500.

The Troubleshooters aren't the only ones getting complaints about Union Roofing. The Pennsylvania Attorney General said it has received 23 complaints since 2013.

And back in 2010, Lubisky entered into an agreement with the AG for Union Roofing and his two other businesses called Philly Roofing and C.R. Thompson Roofing.

Meantime, Lubisky told us he has thousands of satisfied customers and the company tries to address any complaints immediately.

"Attached you will find two letters that were both sent certified to Ms. Johnson and to her son as well - along with these letters were pictures that were enclosed, I put them in the attachment for you to review.

Her 2nd floor exterior wall (pictures enclosed) the aluminum siding on the bay is over 50 years old and deteriorated - in heavy driving rains the water is running behind this old siding and causing her leak. The old aluminum siding must be removed, new tyvek and tyvek tape installed, new vinyl siding installed; we told her that when this work is completed we would also fill her mortar brick gaps with masonry cement at no additional cost to her.

We have met not only Ms. Johnson but we also met Ms. Johnson's son out at the property and conducted a water test and showed them the siding issue. We cannot complete this work for free as it has nothing to do with the 2 new roofs that we completed. Again, it is a exterior wall problem from years of neglect.

We would like to offer Ms. Johnson to come out, remove all the old aluminum siding and install tyvek tape and tyvek to waterproof it - if this STOPS the leak, which we are more than confident that it will, then she has to have the siding completed which would still cost $ 3,850.00 - the original price that we gave her.

Please let me know if you need anything further. 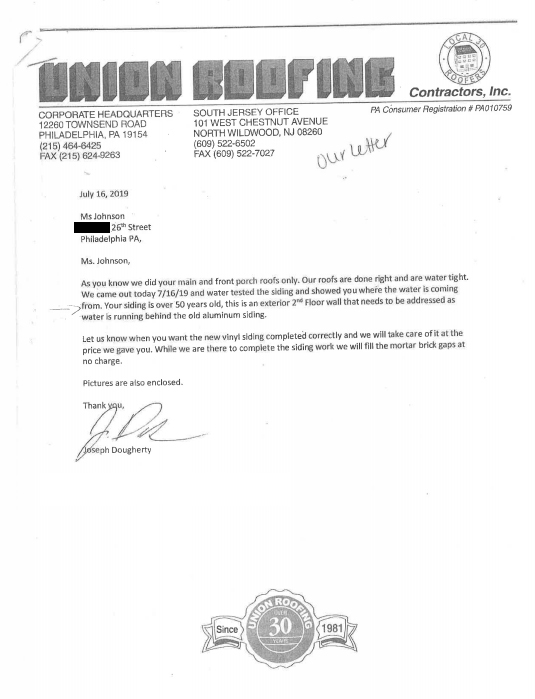 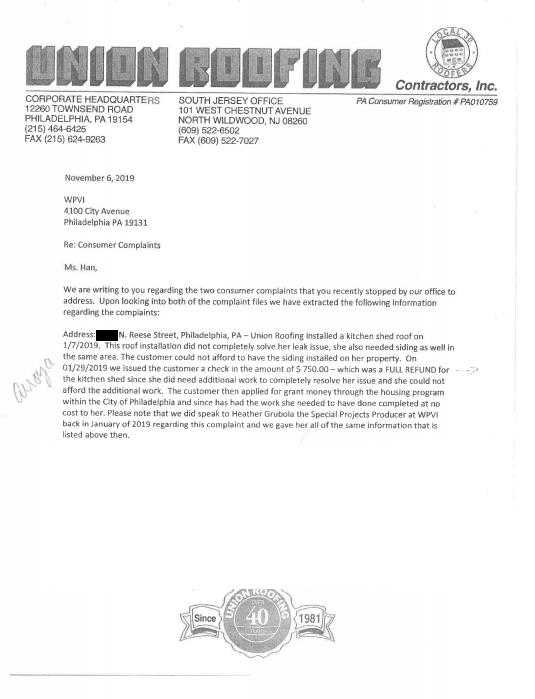 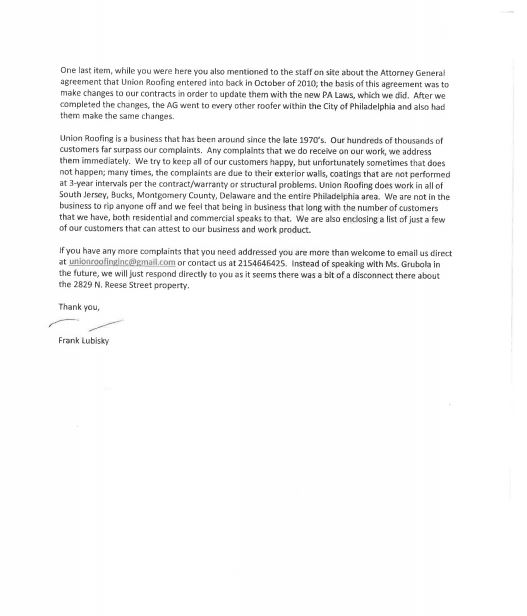 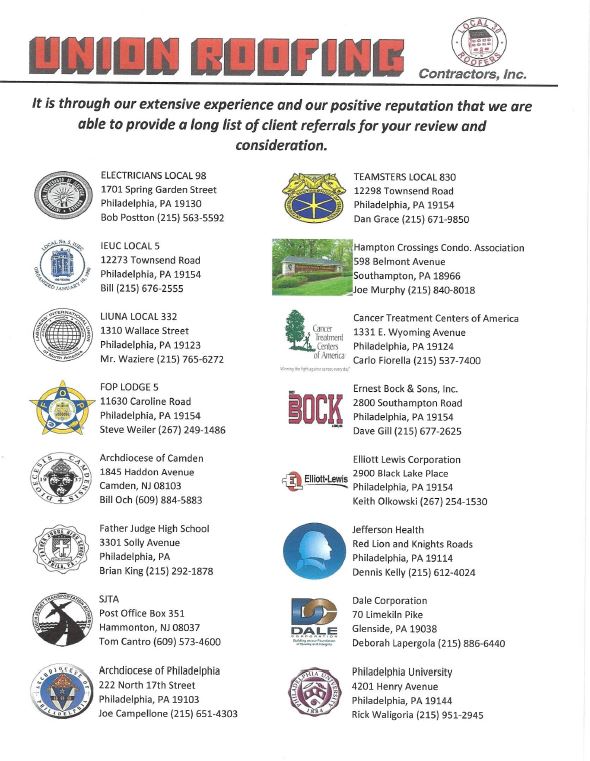 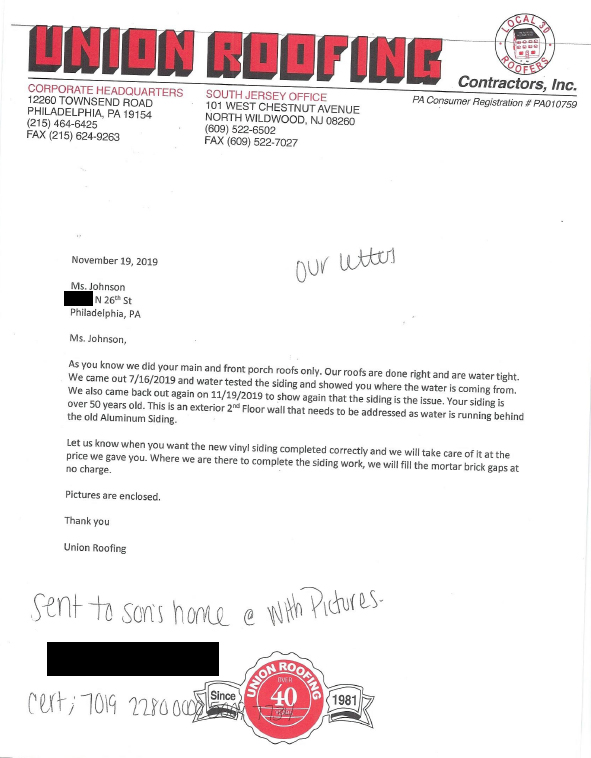 Troubleshooter tips: Before you hire a roofer:

-Get references from multiple sources
-Check for complaints about the company online and call consumer agencies, including Call for Action and the PA Attorney General, to check the company's history. The phone number for the Troubleshooters/CFA is 1-866-978-4232 or 1-866-WPVI-CFA. Our hotline is staffed Monday through Friday from 11 a.m. until 1 p.m.
-Ask to see the company's warranty in writing
-Look for required maintenance work and any other conditions you may have to meet in order for the warranty to remain effective
-If maintenance work is required on the warranty, ask in advance how much that regular service will cost
Report a correction or typo
Related topics:
businessphiladelphiacape may countyaction news troubleshootersaction news investigation
Copyright © 2021 WPVI-TV. All Rights Reserved.
More Videos
From CNN Newsource affiliates
TOP STORIES