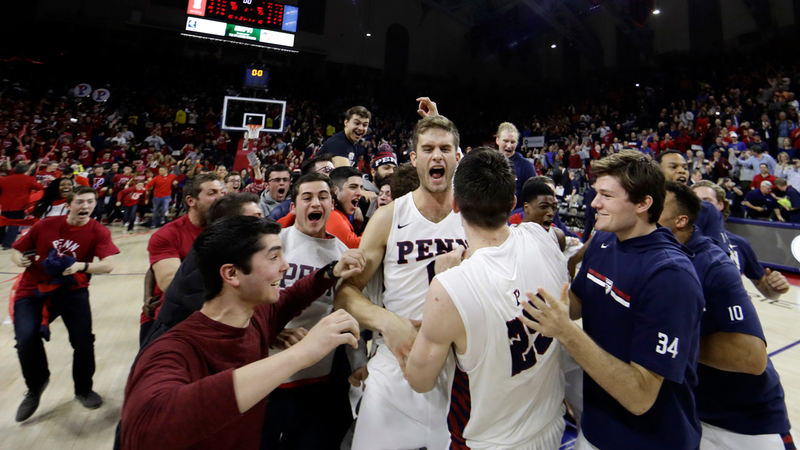 PHILADELPHIA -- Phil Booth took the potential tying shot with hands that have slipped on two Villanova national championship rings, and a tick of the clock suddenly seemed endless.

"The ball seemed like it was up there for way too long," Penn forward AJ Brodeur said.

The shot was off. The Penn party was on.

The Quakers - who had shared the role of Philly's doormat with the other three Big 5 schools during Villanova's rise to dominance - had achieved the improbable upset, beating No. 17 Villanova 78-75 Tuesday night.

The final buzzer sent Penn students sprinting onto the Palestra court at speeds that could have qualified them to run in the famed relays next door. The fans tossed streamers, hopped around at midcourt, and mobbed the players who had set off a regular-season celebration not seen in Philly in years.

And with good reason - the national champion Wildcats had won a city-record 25 straight games against Big 5 rivals Temple, Saint Joseph's, La Salle and the Quakers.

"They call it the Big 5. But really it seems like the Big 1," Brodeur said. "Villanova is always coming out on top. They're always on the podium at the end of the year in the Big 5 banquet."

Brodeur, Antonio Woods and Michael Wang all sank free throw after free throw to pad the lead for Penn (9-2) in the stunner. Penn coach Steve Donahue, who led Cornell to the Sweet 16 in 2010, may have another blooming Ivy League power . Penn last beat Villanova at the Palestra on Dec. 5, 2001, and hadn't beat them at all since Dec. 10, 2002.

The Quakers doused Donahue with water in the locker room as the celebration continued until the coach huddled up the players for a simple message: "We're not pretty, we're gritty."

"It was nice while it lasted," coach Jay Wright said. "We learn from it. It was fun to be a part of it."

Wright calmly tugged at his suit and looked at the scoreboard that read 75-69 as the Wildcats went into a timeout needing a hoops miracle to pull this one off. They nearly got one - Booth hit a fall-away 3 that that pulled them to 75-72 and another with 1.3 seconds to go that made it 78-75.

Woods sailed an inbounds pass wildly out of bounds on the opposite end and Nova had one last shot to extend the streak.

"They trust me with the ball in my hands and unfortunately it was a huge error," Woods said.

Donahue quickly interjected: "I should have put someone there at the foul line at the other end and I didn't. That was my mistake and I knew it. He did what he was told."

The Wildcats won the 2016 national title with a shot at the buzzer and won a few close ones en route to the 2018 title. They turned to Booth to bail them out, but he shot an airball.

Brodeur and Woods each scored 16 points and Wang added 14 points for Penn. The Quakers made 25 of 37 free throws.

Collin Gillespie scored 21 points and Booth finished with 18 for Villanova.

The Quakers came out for primed for an upset at the Palestra, home of some of the greatest moments in Philadelphia college hoops history. With a packed house on hand - "corners," as it's called at the Palestra - and students holding signs that read "There's No Fear Here," Penn did just about everything right early to position itself for an upset.

"Just the look, when you come out of the locker room and it's a sea of red," Donahue said. "I'm glad we were able to reward them."

The Quakers had been building toward a monumental upset since coach Donahue was hired in 2015. Donahue, who flamed out at Boston College, won 11 and 13 games his first two seasons before guiding the Quakers to a 24-9 record and their first NCAA Tournament berth since 2007. The Quakers opened this season 4-0 and would upset Miami 89-75 at the Palestra for their first win over Power Five conference team since the 2002-03 season.

"This group, whatever I ask of them, they try to do," Donahue said.

Penn: Penn has been hot, even after losing last season's top scorer Ryan Betley to a season-ending knee injury in the opener. The Quakers held 35-22 edge on the boards.

Villanova: The Wildcats have been solid, but may have been outside the AP Top 25 without their championship pedigree. They fell out of the poll for a week on the heels of consecutive home losses to Michigan and Furman. But they had won six straight and fattened their record in the city series they made their own.

Villanova: No. 1 Kansas hosts No. 17 Villanova on Saturday at Allen Fieldhouse in a rematch of the 2018 national semifinals.