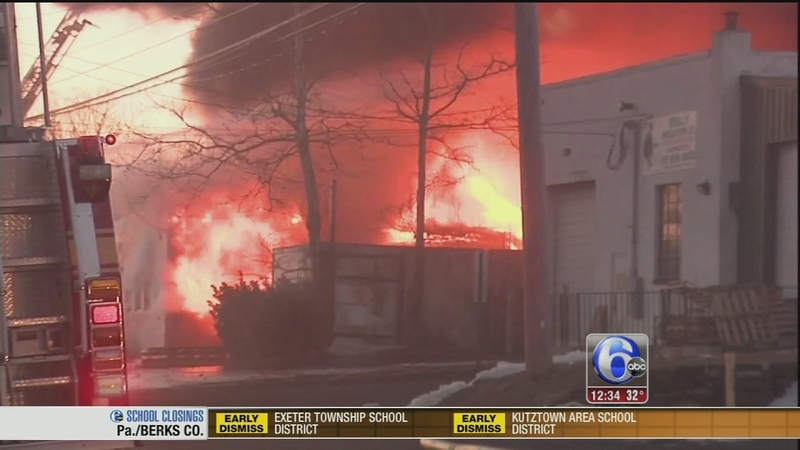 UPPER MORELAND, Pa. (WPVI) -- Investigators are working to pinpoint the cause of a massive fire at a sheet metal plant in Upper Moreland, Montgomery County.

Monday's blaze reached 5-alarms and caused power to be shut off to approximately 900 nearby customers.

Firefighters were called around 5:20 p.m. Monday to Trico Metal Products on the 2300 block of Wyandotte Road along the Pennsylvania Turnpike.

The fire quickly escalated to three alarms; firefighters ultimately struck a fifth alarm prior to getting the fire under control around 7:40 p.m.

"Very heavy smoke and fire conditions. The radiant heat was knocking people back. As far as smoke conditions, it was zero visibility in the street," Chief Brian Focht of the Willow Grove Fire Company said during an evening news conference. 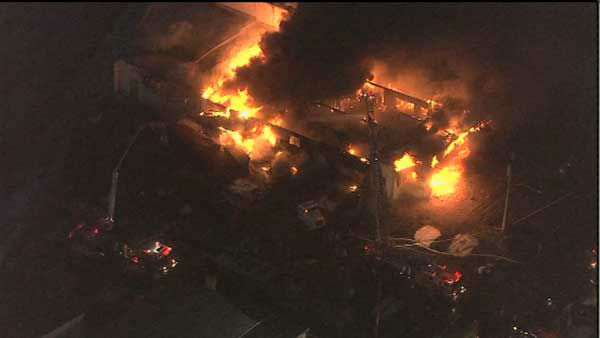 Officials say the fire burned so intensely, firefighters had trouble getting close.

They were also hampered by a lack of water before the fire went to five alarms.

There's one fire hydrant on the industrial block where the company is located, so firefighters had to truck in more water.

The building was rocked by a series of explosions. The Willow Grove fire chief says the explosions were caused by tanks of compressed natural gas.

In addition, the front wall and one of the back walls of the building collapsed due to the heavy volume of fire.

At one point authorities considered closing the Pennsylvania Turnpike, which runs alongside the property.

Peco shut off power to the plant which also cut off about 900 customers in the area. Power was restored about two hours later.

According to officials, no firefighters or plant employees were injured.

24 agencies - firefighters and EMS - worked on containing and dousing the fire.

Action News has learned Trico Metals was started by Peter George Pritz more than 60 years ago. His four sons later took it over.

One of them, Bob Pritz, and other relatives looked on Tuesday as fire investigators from the state and county started picking through the rubble.

Members of the Pritz family said this might be the end of the business, and were not willing to talk about it on camera.

According to the company's website, Trico is a sheet metal fabricator whose clients include businesses in electronics control systems, data processing, medical, transportation and food dispensing equipment.