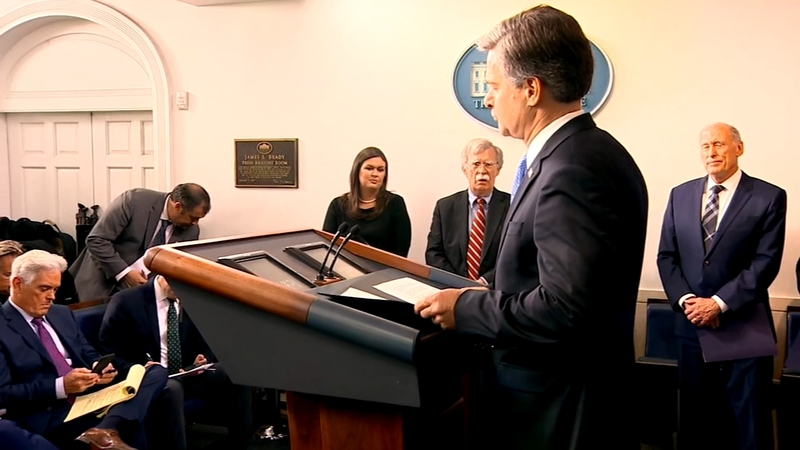 Responding to bipartisan criticism that it has no clear national strategy to protect the country during the upcoming midterms and beyond, John Bolton, the national security adviser, wrote in a letter to Senate Democrats that "President Trump has not and will not tolerate interference in America's system of representative government."

The warning to American adversaries came as top U.S. intelligence and homeland security officials raised alarms about potential efforts to influence the 2018 and 2020 elections. Homeland security chief Kirstjen Nielsen said: "Our democracy is in the crosshairs."

"We continue to see a pervasive messaging campaign by Russia to try to weaken and divide the United States," Director of National Intelligence Dan Coats said.

Their comments during a White House briefing followed weeks after Trump publicly undermined the conclusions of American intelligence agencies regarding Russian interference. After suffering a bipartisan outcry, Trump later said he accepted those conclusions.

They, along with National Security Agency director Gen. Paul Nakasone and FBI Director Christopher Wray, appeared at the White House Thursday to try to reassure the American people they are doing everything in their power to address the threat.

"We're throwing everything at it," Coats said.

Nielsen, Wray and Nakasone had all gathered earlier this week in New York City with leaders of top finance, energy and telecommunications companies for a cybersecurity summit, where they spoke of the urgent need for a collective, collaborative approach to security.

At the event, Nielsen said the cyberthreat that now exceeds the danger of a physical attack against the U.S. by a hostile foreign group.

Wray told reporters that compared to 2016, in 2018, "We are not yet seeing the same kind of efforts to specifically target election infrastructure," but that other efforts to influence public opinion continue. He added that the FBI has active investigations on foreign influence across all 56 of its field office.

"Make no mistake, the scope of this foreign influence threat is both broad and deep," he said.

But Nielsen said that U.S. agencies have "seen a willingness and a capability on the part of the Russians" to attack U.S. election infrastructure.

On Capitol Hill, lawmakers in both parties have pushed election security toward the top of the coming fall agenda amid heightened concerns about interference by Russians and others ahead of the midterm elections.

Asked this week how confident he was in the integrity of election systems ahead of the fall midterms, the No. 2 Republican, Sen. John Cornyn of Texas, said, "I'm confident we're doing the best we can."

Beyond Russian interference with social media campaigns to influence voters, lawmakers are increasingly looking at how to bolster election infrastructure in the states - even though Congress shot down a recent effort to boost federal funding for local and state systems.

Both Republicans and Democrats have criticized the administration's response as fragmented, without enough coordination across federal agencies. And with the midterms only three months away, critics are calling on Trump to take a stronger stand on an issue critical to American democracy.

Sen. Mark Warner of Virginia, the ranking Democrat on the Senate intelligence committee who has criticized Trump for not taking a stronger leadership role on election security, said he was heartened by the White House news conference.

"Glad to see the White House finally do something about election security - even if it's only a press conference," Warner tweeted. "Now, if only it was actually backed up by anything the president has said or done on Russia."

The Senate is working on a bipartisan package backed by GOP leaders that would boost federal assistance to state and local election officials with cybersecurity guidelines, data sharing and security clearances. It's expected in September. GOP lawmakers are wary of being seen as imposing any new regulations on states that have resisted federal control.