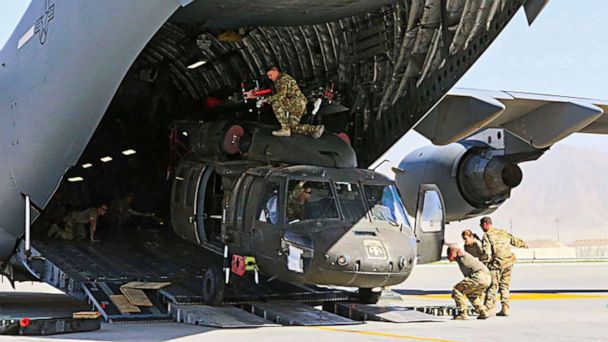 The Pentagon confirmed on Friday that it had turned over the sprawling Bagram Air Base in Afghanistan to the Afghan government and also announced that it now expects the total withdrawal of U.S. troops to be completed "at the end of August."


Handing over control of the base had been seen as a key indicator that the end of the withdrawal from Afghanistan would be completed in July -- months earlier than the Sept. 11 deadline set by President Joe Biden.

But the Pentagon announced Friday that Defense Secretary Lloyd Austin had approved a plan to transfer command authority for the U.S. Forces Afghanistan from Gen. Austin Scott Miller to Gen. Frank McKenzie, the commander of U.S. Central Command.

Pentagon spokesman John Kirby told reporters that Miller will remain in Afghanistan for "a number of weeks."


U.S. military operations at the base ended with the departure of the last military flights carrying out American military personnel and equipment. Earlier this week, U.S. Central Command had said that 896 C-17 cargo flights of material had already taken place.

Kirby also said that the total U.S. military drawdown "process" from Afghanistan would be be completed by the "end of August."

The spokesman also said that the current defensive airstrike authority that Miller has to target the Taliban in support of the military will be transferred to McKenzie.

That development eases concerns that the Afghan military would be even more vulnerable to Taliban forces without American combat air support after all U.S. troops had left.

Even after the completion of the U.S. withdrawal, a force of 650 American military personnel will remain in Kabul to help defend the U.S. Embassy and the civilian airport in Kabul, according to a U.S. official.


This force will be led by Rear Adm. Peter Vasely who will be based at the embassy in command of what will be known as U.S. Forces Afghanistan-Forward.

While Turkey had agreed to provide security at the airport, a move seen as vital in ensuring the safety and operations of the U.S. Embassy, the pace of the U.S. military withdrawal had moved so quickly that questions remained about whether Turkey would have its forces in place.

Also, many details remain to be finalized for plans to remove at least 9,000 Afghan interpreters and their families outside of Afghanistan.