Vernon Odom retires: A look at his legendary career at Action News 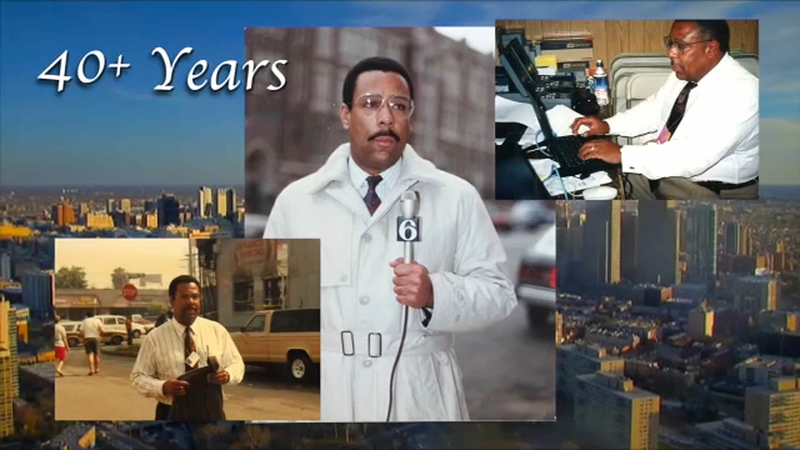 PHILADELPHIA (WPVI) -- For more than 40 years, Vernon Odom brought the big story to Action News viewers from Philadelphia and around the world.

In honor of his retirement, we are taking a look back at his extraordinary career.

It was the spring of 1976 when Vernon joined the Action News team, quickly becoming a big voice covering the big story.

Vernon Odom reports on nine-alarm blaze at the Harrison building in Center City Philadelphia in May, 1984.

Vernon Odom reports on the election of Bob Casey Sr. as governor of Pennsylvania in November, 1986.

The list of major events he's covered is endless, including every presidential campaign starting from 1976, the Three Mile Island disaster, the MOVE confrontations, the Clarence Thomas confirmation Hearings, the Clinton-Lewinsky White House scandal, and the O.J. Simpson Trial.

Vernon Odom recalls covering MLK assassination. He tells his story to Sharrie Williams during Action News at 4:30pm on April 4, 2018.

Vernon has also reported on history-making events around the globe, including Nelson Mandela's release from prison and the first free election in South Africa.

He was there as the U.S. invaded Somalia, logged visits just prior to the fall of the Soviet Union, and he was on the scene for the release of U.S. Hostages from Beirut.

Vernon Odom reports from Washington, D.C. ahead of the inauguration of President George H.W. Bush in 1989.

Vernon Odom was in Philadelphia, Mississippi on the 25th anniversary of the murders of three civil rights workers in June, 1989.

Vernon is known for carefully crafting each report, whether he's standing on the scene of breaking news, in two feet of blinding snow, or even a Super Bowl Win...

We've come to count on Vern to bring us THE BIG STORY... with a big, bold voice!

Vernon Odom talks to pilgrims who made the journey to Philadelphia to see Pope Francis during the 2015 World Meeting of Families.

Watch as Vernon Odom recites a Christmas poem during a report from December of 2014.

Over the years, Vernon has collected many awards and honor.

Just this year, he was named Person of the Year by the Philadelphia Broadcast Pioneers.

From all of us here at Action News: Thank you, Vernon!

THANK YOU, VERNON!! After 42 years at Action News, a legendary journalist is calling it a day. Join us in wishing Vernon Odom the best in retirement. His last day will be Friday. https://t.co/NlMcHUATcF pic.twitter.com/Ejj0LtppIh