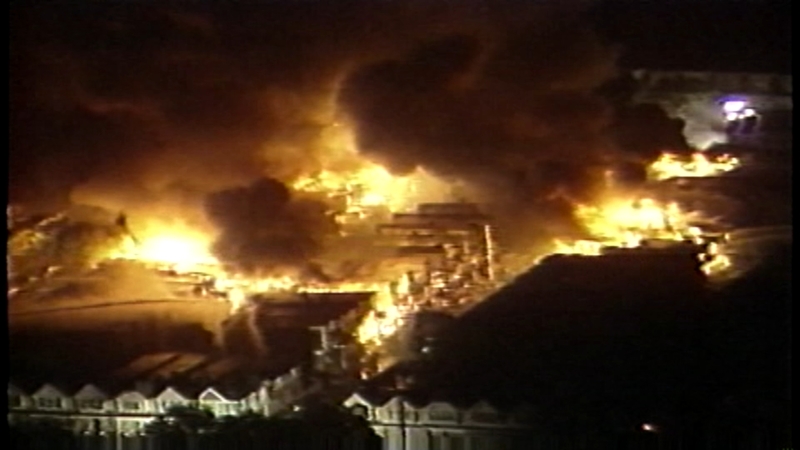 PHILADELPHIA (WPVI) -- The former Philadelphia mayor who led the city 3 1/2 decades ago when police dropped a bomb on a row house and caused an inferno that killed 11 people and destroyed more than 60 homes is calling for a formal apology from the city for the tragedy.

Former mayor W. Wilson Goode Sr. said in an op-ed Sunday in the British newspaper the Guardian that "after 35 years it would be helpful for the healing of all involved, especially the victims of this terrible event."

Goode, the city's first black mayor, led Philadelphia in 1985 when the city clashed with members of MOVE, a radical, black back-to-nature group. It culminated in the bombing of MOVE headquarters, which engulfed a city block in flames. Five children were among the 11 people who died.

"There can never be an excuse for dropping an explosive from a helicopter on to a house with men, women and children inside and then letting the fire burn," wrote Goode, who served from 1984 to 1992.

Goode said he "was not personally involved in all the decisions that resulted in 11 deaths," but took responsibility as chief executive of the city and issued what he called his fourth public apology. He said he was "ultimately responsible" for the actions of those he appointed "even though I knew nothing about their specific plan of action."

William Richmond, the fire commissioner at the time, said in 2010 that the fire which spread down the block was not extinguished immediately after the bomb because officials were worried that firefighters could face gunfire, and thought it would destroy a bunker and help get people out of the house. Goode said he ordered the fire to be put out, but Richmond said he never received such an order.

One of the survivors, Ramona Africa, alleged that police opened fire on MOVE members trying to flee the burning home.

MOVE members rejected the apology idea Sunday, characterizing it as an insincere ploy.

"No apology is going to bring back my baby or any of the children in that house or our brothers, husbands, sisters or other victims," Sue Africa said.

In September 2018, Goode defended his legacy against shouting protesters as the city named a West Philadelphia street in his honor, saying he accepted responsibility but adding, "You will not define me by one day of my life. I am more than that."

"Why shouldn't he be judged on one day, especially since 11 people were murdered?" Sue Africa said Sunday.

Janine Africa, who was one of nine MOVE members sentenced to between 30 and 100 years in prison in the 1978 shooting death of Officer James Ramp, maintains her innocence but said she and other MOVE members were judged on alleged actions of one day.

"I did 41 years for one day, and they never proved I killed anyone," she said. MOVE members have said they believe that Ramp was shot accidentally by another officer.

"They lied then, they're lying now, and we know the apology is a lie," she said.

Former Gov. Ed Rendell, who succeeded Goode as mayor and was the district attorney who prosecuted MOVE members, told The Philadelphia Inquirer that he now regrets his handling of the prosecution of some members. He said if he had to do it over again, he would have offered those who weren't leaders plea deals that included less severe sentences.

"I followed the law, but the prosecutor always has the discretion to use their judgment," Rendell said. "For what they did compared to what some other people do in Philadelphia, they served far too much time."

"If they had to do it over again," Janine Africa said of the events on the day of the bombing, "they would do the same thing if they thought they could get away with it."
Report a correction or typo
Related topics:
politicsphiladelphiamove bombing
Copyright © 2021 WPVI-TV. All Rights Reserved.
TOP STORIES
2nd arrest made in deadly shooting outside Pat's Steaks
Suspect ID'd in deadly hit-and-run rampage in Philly, Montco
Stranger falls capturing marriage proposal. Now she needs your help
Security guard caught on video punching man at SEPTA station
Phillies postpone game against Nationals amid COVID-19 outbreak
Woman caught on racist tirade in NJ hotel to be held until trial
School districts across Delaware Valley react to CDC recommendation
Show More
9 new victims identified in Bucks Co. sextortion case
Woman pleads guilty following deadly DUI crash
NJ officials recommend masking in indoor settings with increased risk
Moratoriums on evictions, foreclosures ending soon. Here's what to do
Athletes and anxiety: How mental health plays a role in performance
More TOP STORIES News