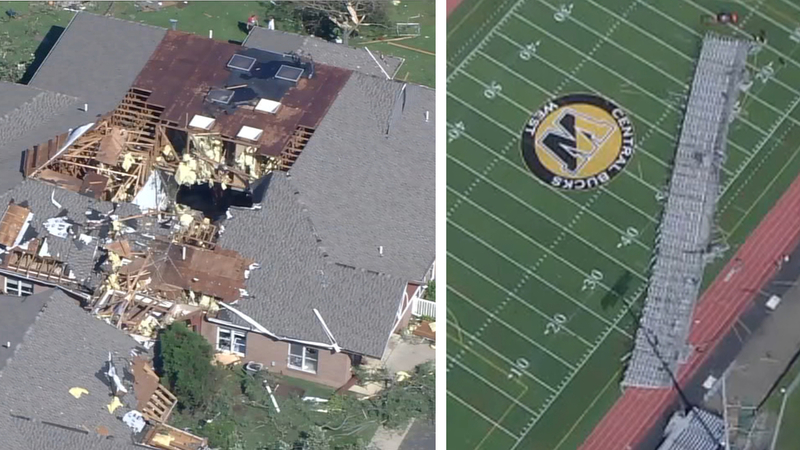 One of the hardest hit areas was Doylestown, Bucks County.

Chopper 6 was over the Children's Village Daycare and the nearby football field at Central Bucks West High school to survey the damage.

Strong winds ripped off portions of the daycare's roof as 135 children, all under the age of five, hid in closets with their teachers.

At CB West, the storm toppled over bleachers, leaving them lying across the field.

Meanwhile, there was a lot of cleanup going on in the neighborhood next to the school.

"We have a big tree in the back and it snapped like a toothpick," said Don Lankford.

That tree came crashing down onto his fence as the tropical storm passed over Doylestown.

He was one of thousands of PECO customers whose families were left without power for more than 24 hours.

"It was pretty bad, I had to go through all different streets to get home," Lankford said.

RELATED: 5 tornadoes touched down during Isaias including in Bucks Co., Montco

That's because those streets around Central Bucks West High School were littered with fallen trees and power lines.

"I think it probably was a little tornado or something," said Lankford.

The National Weather Service believes at least one tornado touched down in Bucks County and impacted the Doylestown area.

Families who live nearby are still trying to wrap their minds around what happened as they clean up and find ways to keep busy until power is restored.

"In the meanwhile, we'll go to some place in town, have some lunch, have some dinner, sit outside and just enjoy the summer day," said Richard Towey.