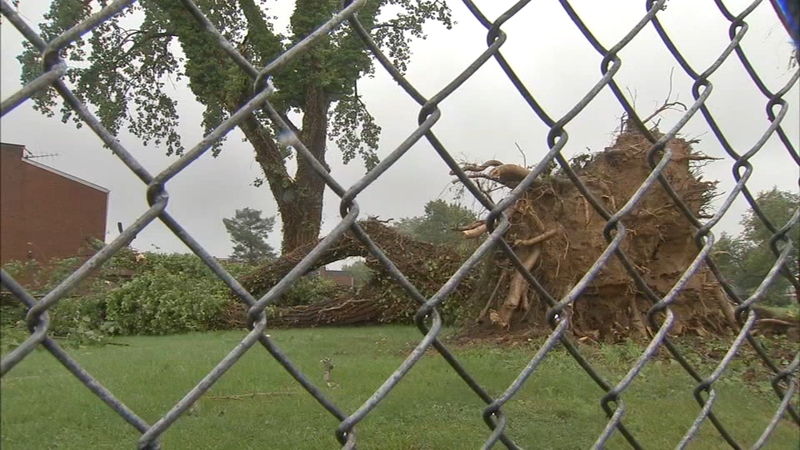 PHILADELPHIA (WPVI) -- Video captures the moment 50-foot trees get ripped out of the ground in the Parkwood Manor section of Northeast Philadelphia on Tuesday.

Trisha Ballassona captured the force of Tropical Isaias on her cellphone around 10:50 a.m.

"It was really scary, especially because I didn't know which way they were going to fall," said Bellassona. "And then when they fell I was like, 'Wow!' It was really intense. It was severely intense."

Bellassona lives across from Anselm School and Daycare which was hit hard.

"Something out of a movie, that's the only way I can explain it," Bellassona said. Her next neighbor Mike Doyle also witnessed a tree strike down in his yard around the same time.

"I just saw all of these branches, and a tree fell on to my tree," said Doyle. "I thought it was like a tornado coming through and it's pretty catastrophic back here."

Just a few doors down, Rebecka McNulty, a mother of three was home with all her little ones when her roof peeled off.

"We heard the wind pick up really loud, our skylight blew off," said McNulty. "I went to check the skylight, grabbed all the kids, the next thing you know sounded like the roof was collapsing."

The McNultys are now dealing with a lot to clean up, and nerves still a bit shook up.

"It was the scariest thing that's ever happened, I was home alone with my three kids," said McGulty. "I would never want to go through this again."