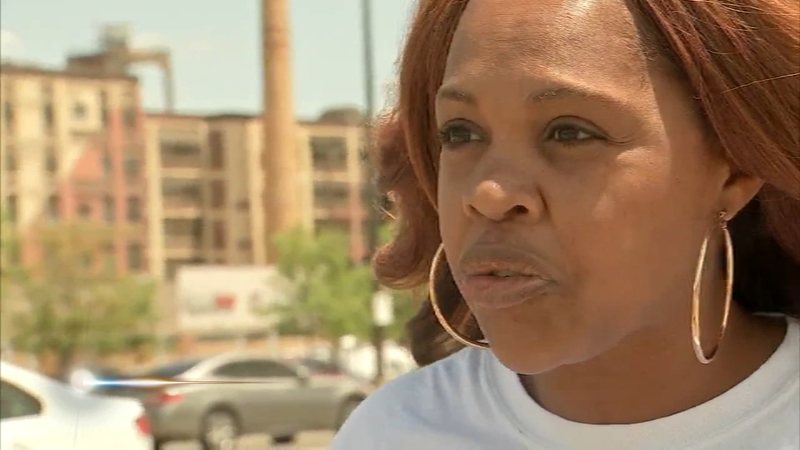 PHILADELPHIA (WPVI) -- Emotions were high Monday morning after a night of looting and destruction in West Philadelphia.

"We called the police two dozen times yesterday. You could not send us one car within 12 hours," said Lucinda Hudson, with the Parkside Association of Philadelphia told Mayor Jim Kenney.

Kenney met with frustrated community members at the Park West Town Center after the weekend's violence and vandalism. A number of businesses in the area were destroyed.

"We're watching what we put together fall apart in a matter of minutes. We need some security now on this land. Now, not tomorrow, not later, but I need you to get somebody to protect us so they won't go back in it," said Kim Fuller of West Philadelphia.

Questions were also raised about the deployment of the National Guard.

Kenney said the National Guard cannot police, but their protection will help to free up city police resources to assist communities in their efforts to rebuild.

"I apologize for what happened yesterday. We just couldn't, we didn't know where to pull from without putting everybody else at risk, putting the officers at risk. (Because) as I said, if we took half off of 52 and Chestnut (streets) and brought them here, they would have gotten destroyed," Kenney said.

Chopper 6 over West Philly where looters damage police SUV on May 31, 2020.

Police Commissioner Danielle Outlaw also visited the community to assess the damage and help clean up.

While some people were cleaning, others were still taking advance of broken into store fronts to steal.

The crimes in the area are too much to bear for those trying to make things better.

"They think they're doing the right thing and they're getting their point across, but they're really not. They are making it worse for black people. They're making to worse," said another woman.

Many of the people on the streets echoed a rhetoric heard nationwide: These acts of destruction are not part of the peaceful protests and message communities want to spread following the death of George Floyd.

"We're sorry this is going on, but Philadelphia, we are better than this. This is Brotherly Love and we will come back. I have faith in our lord above," said Stacey Rivera of West Philadelphia.
Report a correction or typo
Related topics:
west philadelphiacrimeprotestbusinessphiladelphia police
Copyright © 2021 WPVI-TV. All Rights Reserved.
TOP STORIES
Frontier Airlines: 'We are supporting' crew who restrained passenger
"Hands are tied" dealing with teens at NJ shore, police captain says
New details revealed in crash that killed 4 family members
Man dies after shooting in parking lot of gentlemen's club
450,000 bees found inside walls of Montco home
Simone Biles reveals aunt died suddenly 2 days before competition
CVS will raise its minimum wage to $15 an hour
Show More
Governors in NJ, Pa. call on Cuomo to resign: 'We are appalled'
Not all of MLK Drive reopening to traffic; closures remain for years
Upper Merion teachers, staff must be vaccinated or tested twice weekly
AccuWeather: Some sun inland today, showers at the shore
2 injured in Conshohocken incident
More TOP STORIES News