The Wetlands Institute aims to save terrapins, salt marshes through lab programs

Currently, The Wetlands Institute is open to the public on weekends and will open during the week in May.
WPVI
By Trish Hartman and 6abc Digital Staff 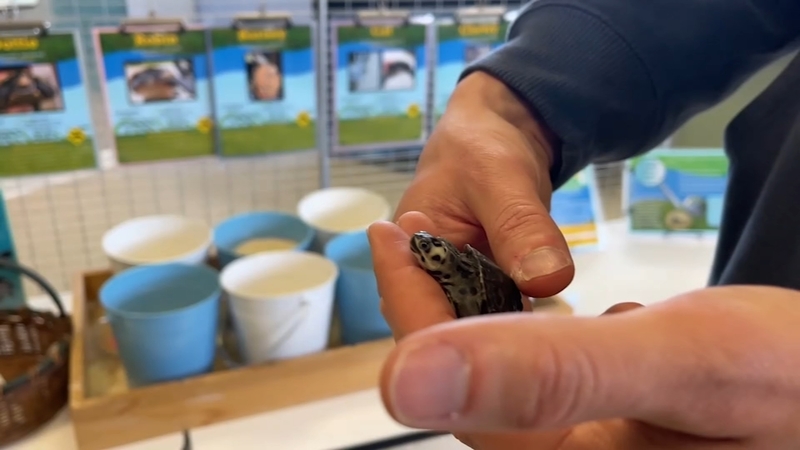 Institute aims to save terrapins, salt marshes along NJ shore

MIDDLE TWP., New Jersey (WPVI) -- Just outside Stone Harbor, New Jersey, environmental educator Danielle Meeker taught a group of preschoolers about some of the creatures inside the touch tank at The Wetlands Institute.

She showed them five tiny diamondback terrapin hatchlings. Then the children followed her outside to release the babies into the salt marsh behind the building.

Among the visitors was the Williams family from Warrenton, Virginia.

"We come to the beaches all the time. So this helps them to connect the dots with the turtles and the horseshoe crabs, so it's good for them to see it hands-on," said Chelsea Williams, watching her two daughters enjoy the interactive terrapin exhibit.

Meanwhile, research scientist Brian Williamson was outside checking on diamondback terrapin nests, looking for hatchlings inside the cages placed over the nests that keep predators out.

He dedicates his work to studying the threatened species that are native to the salt marshes and is a vital part of the ecosystem.

"So things like crabs and snails that will actually feed on the marsh itself; it can damage the marsh over time, and terrapins eat those," said Williams. "So they help keep those numbers in check."

He says very few terrapins are hatched in captivity at the institute.

Williamson showed us one that will be released in July or August and comes from a nest of eggs belonging to a female turtle that was hit by a car.

Most hatchlings found are measured, recorded, and then released.

The Wetlands Institute also strives to protect the salt marshes around its 50-year-old building.

"Sea level is rising too fast for the marshes to keep up on their own. So we're trying to help the marshes keep up," said Devin Griffiths, communication specialist for The Wetlands Institute.

In partnership with the U.S. Army Corps of Engineers and the State of New Jersey, the institute has been conducting the Seven Mile Island Innovation Lab since 2019, using mud from the Intracoastal Waterway to preserve the marshes.

"The project now is to take dredge materials and help build up the marsh islands around here," said Griffiths. "So that they can stay ahead of sea-level rise."

Folks in the area hope as the busy season approaches at the shore, people will stop in and visit the wetlands on their way to the beach.

Currently, The Wetlands Institute is open to the public on weekends and will open during the week in May.