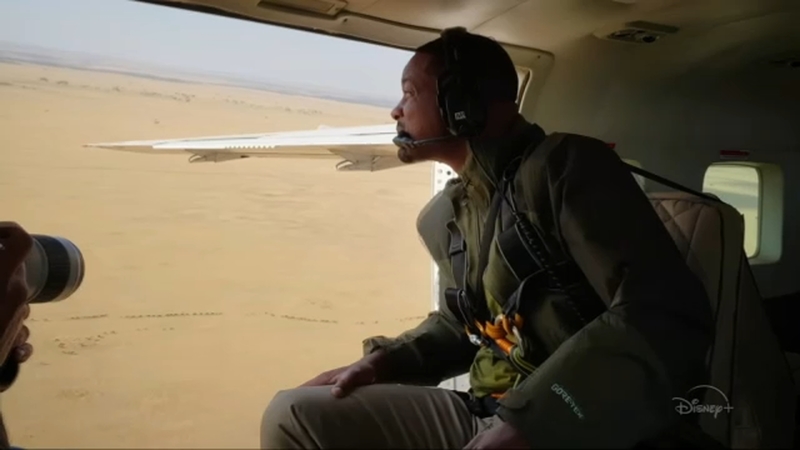 PHILADELPHIA (WPVI) -- One of the world's biggest superstars is exploring the planet's most out-of-this world sights.

West Philly's own Will Smith is on the adventure of a lifetime in a brand new series from National Geographic called "Welcome to Earth."

Smith admits that before this, he had never been on a kayak, never climbed a mountain and never even swam in a lake. He felt like he was really missing something.

He's been on many incredible Hollywood adventures, but he wanted something real. And boy, did he get it.

"It is the deepest and greatest pleasure of my life," Smith said of his adventures with top National Geographic explorers.

West Philly's own Will Smith is on the adventure of a lifetime in the brand new series from National Geographic called "Welcome to Earth," now streaming on Disney+.

His guides were all admittedly star struck.

"He gives me a massive high five and a hug and I kind of step back for a second just to check that it was real and it was really Will," said Polar Expeditionist Dwayne Fields.

Fields took Smith to the middle of an Icelandic glacier.

"This is this kind of things that nightmares are made of," said Fields. "You're in a cramped space and it is freezing cold. There's water rushing in above you. And then we started hearing cracking."

"We start to go down and all of a sudden, there's a swarm of killer bees," said Lin. "But Will kept his cool. Philly has got to be the training grounds for explorers because that's where get those nerves of steel."

National Geographic Mountaineer Erik Weihenmayer brought him inside an volcano in the South Pacific.

"We repelled down into this thing, right onto the shelf above the lava," said Weihenmayer. "I said, 'Hey, what's harder, this or movies?' Will said, 'In a movie, I'm playing a character. This is me. It's harder playing you.' I thought that was really beautiful and human."

"You'll see that he is actually really afraid of the ocean," said Amon. "We didn't just go for a snorkel. We were going to a part of the planet that no one has been before. We're going to part of the planet where, if something goes wrong, no one is coming to help us. So his fear was totally understandable. But one of the best parts was really seeing Will overcome that fear."

The show aims to celebrate our beautiful planet and make explorers out of all of us.