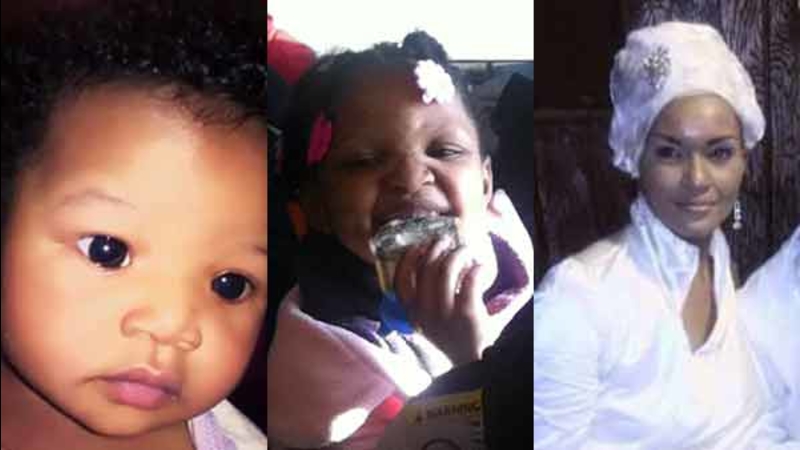 WILMINGTON, Del. (WPVI) -- Action News has learned the names of the two young girls who were killed and of their mother who was critically injured in a Wilmington, Delaware, fire Tuesday afternoon.

The children's father, Mark Carroway, spoke to Action News at the scene on Wednesday and identified the victims as 3-month-old Zipporah Carroway and 3-year-old Elizabeth Carroway.

Their 2-year-old child who was also at the home was treated at Saint Francis Hospital Tuesday and released.

Community members gathered Wednesday night to support the Carroway family and mourn the deaths of Zipporah and Elizabeth.

Hundreds packed the City of Victory church, many carrying bags of donated clothes for the couple and their five remaining children. The prayer service was organized by Pastor Jordan Robinson and fellow pastors in an effort to help the family who has lost everything.

"I can't imagine the pain that he's feeling knowing that his wife is in critical condition, he lost two of his kids and how that would hurt," said Nate Congo of Wilmington.

"I was shocked because they been through enough, and all I kept saying was, 'God, how much more?' " said Rozalyn Chandler of Dover.

That's the question many are asking.

The blaze erupted around 4:10 p.m. inside a home on the 400 block of North Monroe Street.

It's believed the deadly fire began in the first floor living room. What sparked it is still being investigated.

Mark Carroway had gone to pick up some of his older children at school when he learned the fire had broken out at his home.

He tells us, "To get a call, an emergency call saying your house is up in flames. That's... that's unbelievable."
Intensifying his pain, Carroway says in July of 1995 his mother perished in a fire trying to save four of his sister's children.

Carroway explains, "One thing I prayed to God about, is that I didn't want this to happen again, because this is what my mother and my sister's kids went through. And to be the second time around, it's really overpowering."

The husband and wife are Pentecostal preachers whose worst fears have come true.

"Me and my wife always prayed even just on last week that we don't want to lose babies," said Mark Carroway.

Officials say the ferocious fire was called in by a passing ambulance crew. A fire engine that was dispatched for another incident arrived very quickly.

Wilmington Fire Chief Anthony Goode tells us, "One minute and 35 seconds to be exact for Engine 6 to arrive on scene. They arrived on the scene and gave a report of heavy fire showing from the ground floor."

A news conference on the fatal fire in Wilmington, Delaware.

"From the back of her head to her calf, it was burned," neighbor Reginal Seeney said describing the mother's injuries.

Witnesses say despite her injuries, the mother tried to go back into her burning home.

Neighbors say all they could do was call for help.

"She just was screaming, 'please get my babies, help me, help me,' and it was surreal - my husband and I tried to do the best that we could to help, it was horrible," neighbor Shantala Seeney said.

The inferno at times was so intense the Action Cam captured images of a firefighter going headfirst out of a second story window. He wasn't injured and continued fighting the flames.

Authorities say the mother and children are members of a family of nine.

"The house was like any home with nine people living in there, a lot of materials in there, and the fire traveled quickly," Chief Goode said.

Maddening for fire officials is the fact that there was already heavy fire showing when the ambulance crew spotted the flames and called radio dispatch.

The fire scene is in a heavy populated area - just doors from a busy commercial zone. Yet there were no prior 911 calls.

"Even with heavy fire and smoke showing in a heavily trafficked area, where 4th Street is just up the block 100 meters, no one had called 911," Chief Goode said.

The 911 calls did eventually come, but not until after the ambulance crew had already spotted the fully involved fire.

In addition, fire officials say they did not find any working smoke detectors in the house.