"If I can be a voice for people who might be intimidated by coming out...they see me doing it in front of pretty big people in the WWE world, hopefully it will give them the courage to do it."
WPVI
By by BROCK KOLLER 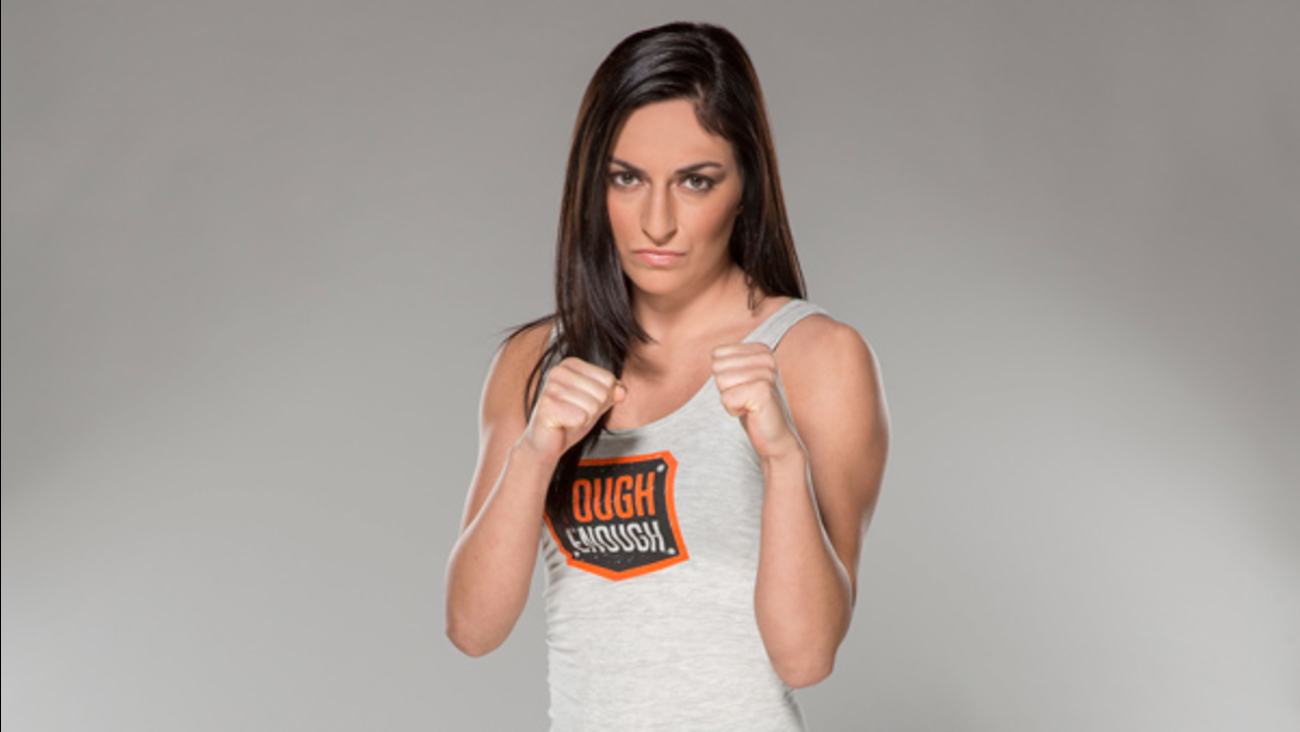 After coming out to the world on WWE television, MMA fighter and Shamang Township's own Daria Berenato is looking to make more memorable moments in the world of pro wrestling. (WWE)

PHILADELPHIA (WPVI) -- 21-year-old Daria Berenato from Shamong Township, New Jersey was recently standing inside a wrestling ring in Full Sail University, in her bathing suit, on worldwide television, in front of a panel of judges made up of WWE hall of famers and legends including current Executive Vice President of Talent, Live Events and Creative, Paul Levesque, better known as superstar Triple H.

This was her job interview.

It was by no means a typical job interview.

Which makes sense, since Berenato is not applying for a typical job.

A risk-taker by heart, she is hoping to be named the next WWE female wrestler, referred to as Divas, by winning the company's reality competition show Tough Enough which awards the champion a one year, $250,000 contract based on viewer voting.

Her journey to that WWE ring began when she was a sophomore at Seneca High School in Tabernacle, NJ. The athletic Berenato decided she wanted a change and quit all of her sports teams.

But after a couple years of being a "normal kid," her competitiveness drove her to get back into sports, but not on a court or track.

"I wanted to get back into competing and being great at something. I ended up being better at martial arts than I was at any of the sports I played," Berenato said.

Though she had success in sports like basketball and lacrosse, she didn't know at the time just how good she would become at mixed-martial arts.

But once she stepped inside the doors of Liberty Boxing in Washington Township, Berenato knew it was her calling.

"When I got my driver's license, I would actually drive an hour each way just to train. I would get home at like 11:00 p.m. and then have to go to school the next day and do it all over again," she said.

Berenato had no prior experience in grappling, so she was taking a risk -a trend throughout her life. As there were no female MMA leagues in New Jersey, Berenato had to compete in an all-boys tournament.

"The first match was me and one of the bigger boys, obviously they were all bigger than me. He took me out to the point where I felt I went to sleep, I was completely unconscious," Berenato recalled. 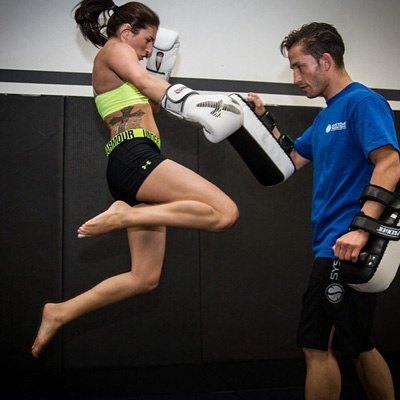 However, when she regained consciousness, Berenato had one thing on her mind - "Can I continue to fight?"

She was allowed to continue and took down that boy and three others to win the tournament. She knew she had something.

"I don't let failure stop me. I don't find champions as people who were always successful and got to the top. I find champions as people who were knocked down 20 times and got back up. I think the story of a true champion is somebody who has faced defeat, faced rejection, and who has overcame that. I think I'm the perfect example of that," Berenato said.

On her graduation day, at age 17, as soon as Berenato received her diploma, she packed up every single item she owned in her car and took off to American Top Team in Coconut Creek, Florida to see just how far her MMA abilities could take her.

"The story of my life is kind of being that underdog, the little engine that could type thing where I kind of had to prove myself to everybody. I always had these crazy wild dreams for my career choices," Berenato said.

Nicknamed the Jersey Devil and now living in Los Angeles, Berenato is ranked #9 in the state of California and is preparing for her next risk - to conquer the WWE ring. 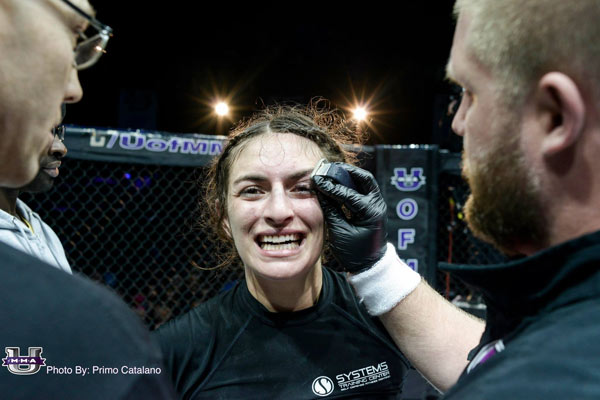 Courtesy of The University of MMA

In sports entertainment, Berenato knows it's not only about a wrestler's athleticism, but also her performance and personality.

"I think I'm tough mentally. Obviously, I have the physicality, the athleticism, and I think I'm a character. I think I'm somebody that people want to listen to, want to talk to, and interact with because I'm relatable and real," Berenato said.

Berenato has performed on screen in the past, starring in and producing indie films. In fact, it was on one those films where she met her current girlfriend. Ironically, the movie's plotline was about a mother not accepting her daughter dating another woman.

"I was doing the casting as well and I cast my now girlfriend in it. So she and I played the lead and literally, how the story played out was how our lives played out. We fell in love as we were filming the movie and neither of us had dated a girl before so it was kind of a crazy story," Berenato said.

For Berenato, it was the blurring of reality and fiction - a common theme in WWE.

Sometimes, WWE fans are not sure what's real and what's just part of the show: Did CM Punk really say that? Was John Cena really hurt? Was Vince McMahon really speaking the truth about Bret Hart?

Which brings us back to Daria Berenato's job interview, standing in front of the WWE judges when she was asked a very real question - 'Are you in a relationship?'

In a matter-of-fact tone, Berenato responded, "I don't have a wife yet, but I have a girlfriend."

Berenato said as soon as she was asked that question, she realized that was her moment. Though, she admits, there was no premeditated notion to talk about her sexual preference during the interview.

"That was not planned. That was not thought about. I didn't even consider it, to be honest. I did talk to my girlfriend before I left in California and I said, 'Hey if it comes up, do you mind if I tell the truth?' She was like, 'Absolutely tell the truth.' [But] I didn't sit down and think, 'Oh, how can I make the judges like me? Let me tell them I'm a lesbian.' I would never artificially plan like that. It wasn't premeditated. I think that's what made the moment so special," Berenato said.

Berenato agrees that earlier in the show she came off a little guarded, but once she was just being herself, she noticed the judges understood her better, just like her family has. She says the reaction from social media has also been wonderful.

"I've gotten so much generosity and so much love so far. People from all kinds of LGBT organizations reaching out saying, 'what you did was amazing, thank you for representing our families,' and that kind of stuff. I just couldn't be happier with the way it worked out. I never could have planned such an epic moment," Berenato said.

At 21 years old, the WWE hopeful is happy if her words and actions help others who are going through what she did.

"If I can help people in this process and be a voice to people who might be intimidated of coming out themselves or are scared to or think that it's wrong and they see me doing it in front of pretty big people in the WWE world, hopefully it will give them the courage to do it," she said.

On WWE's Tough Enough after-show Tough Talk, fan favorite superstar and judge Daniel Bryan said Berenato stole his heart and said it was so brave of her for what she did.

@toughdaria We've #GotYourBack! Thanks for inspiring others and living your life! @glaad #WWEqual.

Though she is extremely proud of her memorable Tough Enough moment, and admitted to Bryan it's the riskiest thing she has ever done, she said that is only one of many attributes that define her.

"So if they know me as the girl who came out on national television and then got to the WWE, I'm totally fine with that, but I do have more to me," Berenato said.

The Jersey Devil says even though she is one of the youngest competitors, she is still an intimidating force. Berenato says when looking at her MMA background, her personality, and her character, she is without a doubt the toughest girl in the competition. 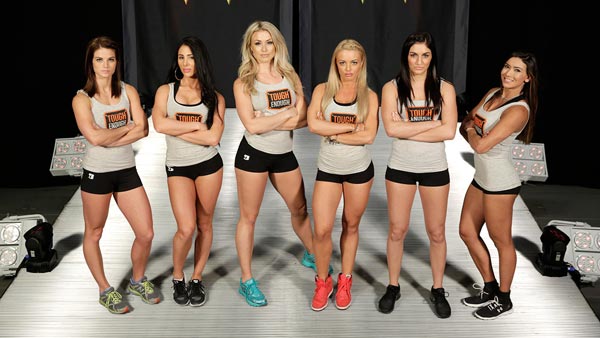 And she is taking her Jersey perseverance and determination with her on this journey.

"New Jersey is what shaped me into who I am. It's the character that I carry every day. I am representing the East Coast. I am the only one representing the Jersey-Philadelphia tristate area. Make sure to keep that in mind when voting," Berenato said.

Growing up, Berenato had season tickets to the Philadelphia 76ers. Her days of watching Allen Iverson lead the team to the NBA Finals showed her what it takes to become a champion. 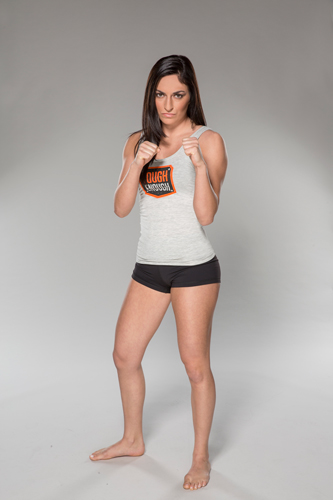 And for the girl who loves taking risks - from quitting every sport she knew to try new one, to driving over a thousand miles across the country on her high school graduation night to hone her craft, to coming out to pro wrestling legends in her bikini on worldwide television - this Jersey Devil's story is far from over.

"I was born ready for this. MMA was a nice paving ground for this. I kind of feel more ready than anybody [on the show]. This is just an opportunity of a lifetime," Berenato said.