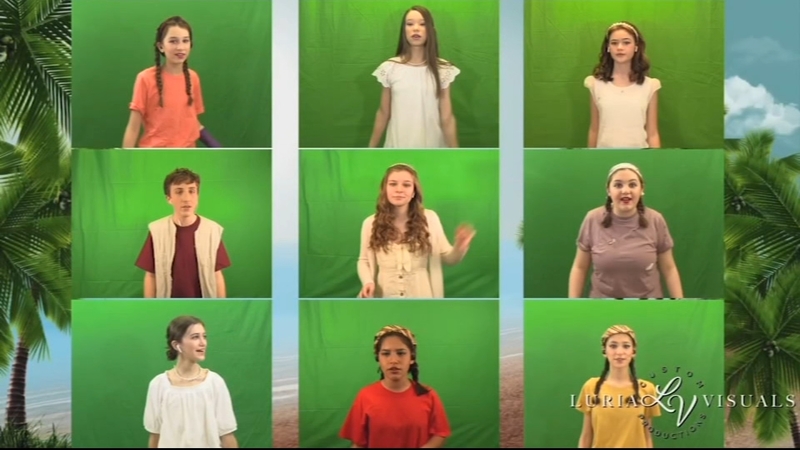 ABINGTON TOWNSHIP, Pennsylvania (WPVI) -- The shows must go on in the Abington School District.

"It was my senior show, and it means a lot to be able to do it," said senior Grace Stancavage.

Despite the pandemic, teachers and students at Abington Junior High School and Abington Senior High School have been working hard to deliver their annual spring theater productions while adhering to safety protocols.

"It's been so isolated. We've been so separated, and so the fact that we can come together and do this is great," said freshman Caroline Cook.

The schools just managed to squeeze in their productions last year before the shutdown.

Discussions quickly pivoted to this year, and how they could carry on while maintaining safety precautions.

"It would have been so easy to say, 'Cancel theater this year. Cancel music, cancel everything. We'll get to it next year.' But for these kids, this is their time," said Lori Wolf, co-director at Abington Senior High School.

If 'all the world's a stage,' as Shakespeare wrote, then why not Zoom?

"The kids are almost getting an education in movie and TV because they have their own camera," Wolf added.

The productions are being recorded, pieced together, and then will be live-streamed. There will be no in-person audience.

"Instead of people, you're just recording in front of a camera," said freshman Daniel Holaman.

Students at the junior high will be performing the musical 'Once on This Island'.

Abington Senior High School students are putting on a play and a musical: '13 Ways to Screw Up Your College Interview' and 'Peter Pan'.

Traditionally, the students perform full Broadway shows, but this year they chose the "junior" versions because they are shorter and would better adapt to the logistical challenges.

Senior Sydney Cain-Frazier is playing 'Captain Hook'. She said earlier this year, she was so determined to perform, she would have written a play.

"I was so nervous to the point where I was like, I'm just going to write my own show. I was like writing a show for friends, but they were like, 'No, we're going to have the show,'" Cain-Frazier said.

The Junior High School production is hybrid, with both in-person and virtual components.

Offices and practice rooms were transformed into single-person studios with green screens and cleaned between actors.

The senior production is all virtual so once the sets are made and the costumes are curated, they all go home with the students for recording.

With the acting done remotely, they have had to get creative.

"We did a lot of reaching out of one camera, and the other person reaches in from their camera," described Wolf.

The students emphasized the importance of making this happen, especially after such a difficult year.

Walker says the whole experience has been very rewarding for the students.

"I've been seeing the kids light up inside, and that's been the most wonderful thing for me, and it's made all of it worth it," said Walker. "We weren't connecting musically or theatrically, and we felt that the kids really, really needed this."