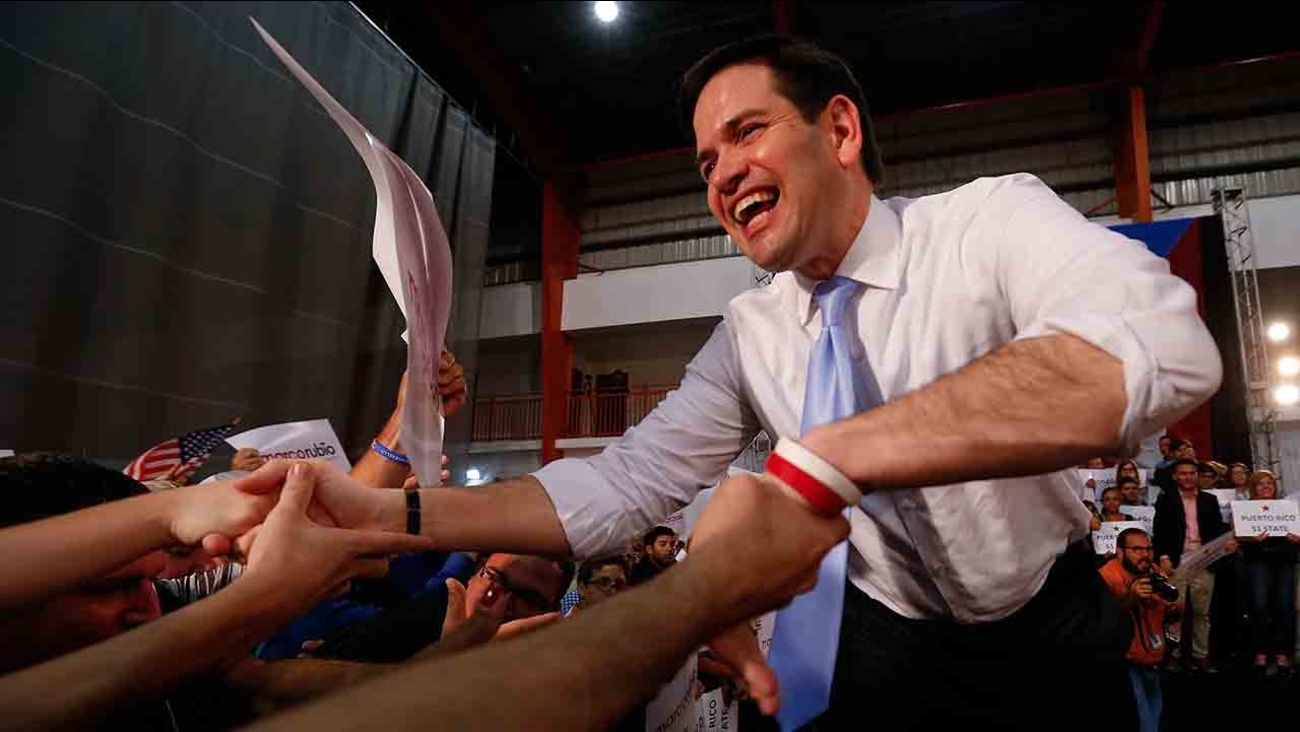 Early returns showed Rubio with 2,463 votes, followed by Trump with 421 votes and Ted Cruz with 276 votes. Party officials estimate more than 30,000 people voted Sunday in an island struggling through a dire economic crisis.

In addition officials say the votes that some 6,000 inmates cast on Friday won't be available until Wednesday.

The U.S. territory's three other super-delegates already have committed to Rubio.

If a candidate gets more than half the votes, he gets all the delegates. If no one gets half, the delegates are divided proportionally.

Economic woes affected the election itself. Edwin Mundo, electoral commissioner for Puerto Rico's Republican Party, said budget cuts forced it to reduce the number of polling places to 110 from more than 3,000 in 2012, dramatically reducing turnout.

Voters said in interviews that they want a U.S. president who will help the island emerge from a decade of recession and a debt crisis that threatens basic government services.

"We need a radical change," 53-year-old Richard Suarez said as he waited to cast a ballot for Rubio in Guaynabo, a city in the San Juan metropolitan area. "Otherwise, we'll be stuck in the same situation and will have to keep asking the U.S. government for favors."

Residents of the island cannot vote in the general election in November but they can take part in the party primaries.

A decisive victory, with more than half the vote, would give one candidate all 20 delegates at stake. Otherwise, they would be distributed proportionally, though a candidate would have to get at least 20 percent to qualify. Three other super-delegates already have declared for Rubio.

No candidate has had a major presence in Puerto Rico this cycle, though Rubio visited the island Saturday for the second time in seven months There have been no publicly released polls.

The result could be affected by about 6,000 votes cast on Friday by prisoners. Puerto Rico is one of the few U.S. jurisdictions that allow inmates to vote. The only other people allowed to submit absentee ballots in the territory are members of the military but party officials said they did not yet know how many of those had been cast.

Any registered voter could take part, but only if they sign a document of affiliation with the Republican Party moments before casting a ballot.

Politics in Puerto Rico generally revolves around the island's relationship to the U.S. One major party favors statehood and the other wants to maintain the current semi-autonomous commonwealth status. A small minority favors independence. The pro-statehood party has traditionally attracted Republicans and anyone taking part in the primary must sign a pledge to support the effort to become the 51st state.