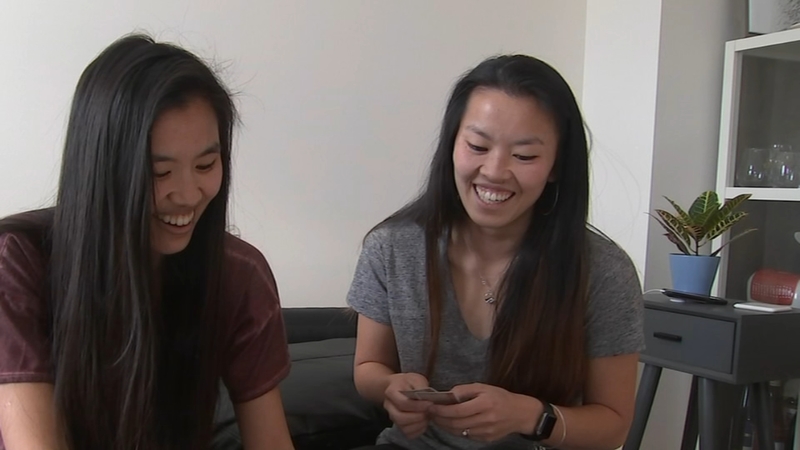 PHILADELPHIA (WPVI) -- Grace Farrow, 23, took the 23andMe DNA test about three years ago after her boyfriend told her she didn't look 100% Chinese. He was right.

"I took the test and found out I was 80% Chinese and 20% South Asian. Then from there, I never logged back in," said Farrow.

Farrow, who lives in the Fairmount section of Philadelphia, forgot all about the test until a few weeks ago.

"Earlier this month my boyfriend texted me and said, 'Hey check out your 23andMe profile' I was kind of like, 'What on the account is so important that I need to see right now?'" she said.

"All of a sudden I saw a predicted sister. I saw her initials and I just couldn't believe it. I stared at it for about 30 minutes," said Farrow. "I was shocked. Stalked her on social media. I was like 'Wow! she really looks like me!' Then I decided to connect with her."

The young woman she connected with through the DNA site app was Maura Rooney, also 23, and from Durham, North Carolina.

"From there we FaceTimed right away," said Rooney.

The connection and resemblance uncanny, "You know how you make your own facial expressions but you can't mimic yourself? Well, when I looked at her I said, 'Oh my God, she's making the same faces as me,'" said Farrow.

The backstory: Grace is 11 months older than Maura.

"The craziest thing is we were both adopted from southern China when we were babies. She grew up in Ohio, Florida, kind of around the Southeast, I grew up in North Carolina," said Rooney.

The reunion in Philadelphia is their second time meeting. Two weeks ago they met for the first time face-to-face with both of their moms in Nashville. They say their moms are even alike.

"I think the best part about this is everyone has been really accepting. Moms, dads, siblings, and everyone is just really excited for us," said Farrow.

Both young women were adopted into American families that had an older biological child. Grace grew up with an older sister and Maura, an older brother.

Now they call themselves a super-family, they're are working on creating their own made-up holiday where both extended families can get together and celebrate.
Report a correction or typo
Related topics:
family & parentingphiladelphiafamilydna
Copyright © 2022 WPVI-TV. All Rights Reserved.
TOP STORIES
Fire on roof sends smoke billowing over Center City
5 hospitalized after car crashes into utility pole in Montco
After the omicron wave, what's next for the COVID pandemic?
Police investigate 2 deadly hit-and-run crashes in Philly
Car crash sends vehicle into side of home in Lawndale
CDC warns about counterfeit N95, KN95 masks
AccuWeather: Feeling Better Today
Show More
Car flips over guardrail, lands in woods in Haddon Township
Police: Man shot, killed in Philadelphia's East Falls section
All 100 lab monkeys accounted for after several escape crash
Montco health department ties 10 hepatitis A cases back to restaurant
Arnold Schwarzenegger involved in multi-vehicle crash
More TOP STORIES News