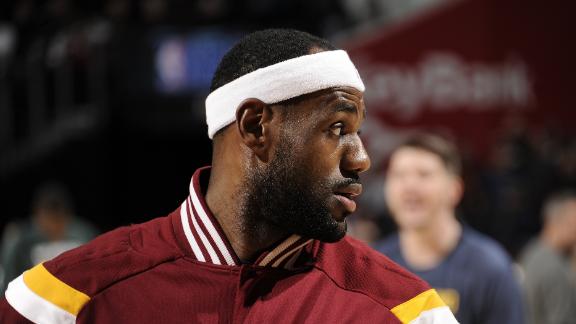 TORONTO -- Decades after he started to become known just as much as an advocate for AIDS and HIV awareness as he was for being a basketball player, Magic Johnson challenged today's athletes to use their platform to take up a cause.

And he commended LeBron James for doing just that.

"They have to get involved socially," Johnson said Friday at The Giant of Africa, a benefit organized by Toronto Raptors general manager Masai Ujiri to honor the late former South African president and Nobel Peace Prize winner Nelson Mandela on the first anniversary of his death. "They have to because it affects them, too. And it affects their families. They grew up in these situations; they must not forget that. They [were] once poor, they went to inner-city schools that didn't have technology or computers, they didn't have good books. See, I went through that whole situation. They went through that as well. A lot of their cousins are still going through that, so they must not forget that. I hope that they would do more.

"But you see LeBron. LeBron is a great example of doing a wonderful job. When this first came out, when you think about everything that he stood up for -- the Donald Sterling thing, when that mess happened, just now with these young people being shot down unarmed, he's been right out front, so I've got to give him a lot of credit. If he's out front being the best player, then the other guys usually follow the best guy."

On several occasions over the past two weeks, James has not shied away from questions about the social unrest stemming from the deaths of Michael Brown in Ferguson, Missouri, Eric Garner in New York and 12-year-old Tamir Rice in Cleveland, which all came at the hands of police officers.

"It's a sensitive subject right now," James said Thursday. "Violence is not the answer, and retaliation isn't the solution. As a society, we just have to do better. I pray for the families of the lost ones."

Johnson also preached peace as the U.S. finds itself in a precarious situation, pointing to Mandela's work with race relations in South Africa as an example to follow.

"If it's just talk and [African-Americans] still stay suppressed and think that people don't care about them, then the same thing is going to happen. And so it's going to be important that these meetings take place and we can really bring about serious change because the distrust and the disconnect is huge. Make no mistake about it. It's bigger than we've seen on TV. Blacks don't think that they're ever going to get a fair shake; they think every time the police is coming, it's going to be trouble. And so we've got to really make sure we can bring about serious change on everybody's side. On minorities' side as well as the law enforcement side, as well as the government side. 'Cause everybody gotta come together on this thing."

Johnson was one of several NBA dignitaries to attend, along with Charles Barkley, Dikembe Mutombo, Tracy McGrady and the league's deputy commissioner, Mark Tatum. The event included a $2,500-per-person entry fee to attend a private panel discussion with the special guests before the game, with proceedssupporting the Nelson Mandela Foundation and Ujiri's nonprofit organization, Giants of Africa, which uses basketball to educate and enrich the lives of youth in Africa.

"The world is not in a good place, in my opinion, and [Mandela] makes it better," Ujiri said, sharing that when he met Mandela face to face in 2006, it "changed everything" for the Nigeria native. "I think he's going to be bigger, even though he's passed. He was bigger than life."

Johnson, Barkley, Mutombo and McGrady were greeted with standing ovations by the Air Canada Centre crowd during various timeouts throughout the Raptors' loss to the Cleveland Cavaliers.

"It's incredible," Ujiri said. "To see Magic, Dikembe, Charles, all these guys here, you can't ask for anything better, and they came just like that. ... Everybody has embraced it. It's touching for me."

"That's a man that not only represented his own homeland, [but] not only in America and here in Canada, he spoke volumes in all parts of the world," James said. "It just goes to show what one man can do by his voice's power, and for us to be able to celebrate him and the greatest game in the world, basketball, it was pretty cool."

Toronto coach Dwane Casey was impressed by his GM's vision for the event.

"It's great," Casey said. "I think that is great for the community, for the cause, for what [Ujiri] stands for, for what's going on in the States right now, I think it says a lot that he can pull it off and have everyone come here and honor Nelson Mandela and what he stood for. I think it speaks a lot about the good in people and the good in mankind."

Cavaliers coach David Blatt, no stranger to the cross section between sports and society having coached in the Middle East for years, said athletes can always have a greater impact than just in the games they play.

"I've always felt that sports and sportsmen are amongst the great ambassadors for spreading goodwill and the right message," Blatt said. "Certainly, Nelson Mandela was a champion, if not the champion, for peace and for bringing people together and fostering understanding. [He was] an example for overcoming adversity and adhering to principles that are valuable to all of us, and he [was] an example to all of us."

Like Johnson, Blatt sees the significance of James speaking up.

"First of all, LeBron, in addition to being one of the great basketball players of all time, is a man and a human being who has and should voice his opinion on issues that are of importance to him and importance to all of us," Blatt said. "And I admire him for it."