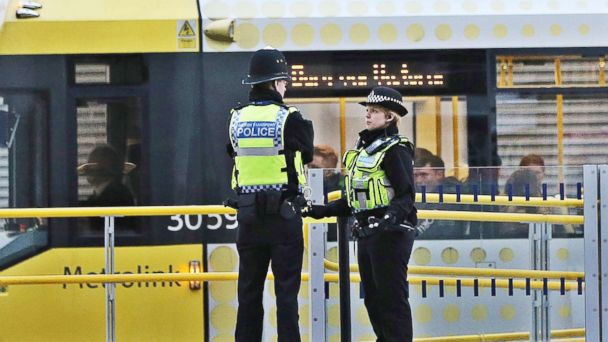 LONDON -- A police officer was among three people stabbed on New Year's Eve in Manchester, England, in what authorities are considering a "terrorist incident."

The attack happened Monday just before 9 p.m. at the city's Victoria train station, which is close to Manchester Arena. That's where a suicide bomber killed 22 people at an Ariana Grande concert in 2017.

"That the incident happened so close to the scene of the terrorist attack on 22 May 2017 makes it even more dreadful," Hopkins said.

The injuries to the victims, who were not identified, were serious but not considered life-threatening, police said.

"My thoughts are with the couple, who are still being treated in hospital for their serious injuries, and with the brave British Transport police officer, who was also stabbed during the attack," Hopkins added.

The officer has been released from the hospital, police said.

Officers tackled and detained a 30-year-old suspect shortly after the attack, police said.

The suspect has not been identified or charged and is being held on suspicion of attempted murder.

There was not an ongoing threat stemming from the incident, said Assistant Chief Constable Rob Potts, though extra officers will be visible on the streets and Britain's official threat level is still set at "severe."

Potts urged the public to come forward with any additional photos or video of the incident to help with the investigation.