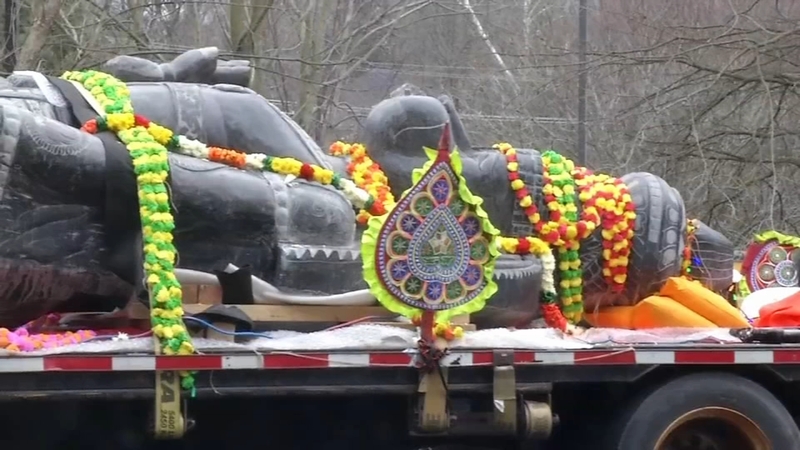 Statue of Lord Hanuman, largest in the United states, arrives in Delaware

HOCKESSIN, Delaware (WPVI) -- A special delivery arrived in Hockessin, Delaware honoring those who follow Hinduism - the third largest religion in the world.

It arrived on a cold day in January, but that didn't dampen the enthusiasm of those greeting the statue of Lord Hanuman as it arrived at the Hindu Temple of Delaware.

"And from about a quarter of a mile away to here, everybody came on foot with this and the priest performed a welcoming ceremony," said Pramod Mathur, board member of the Hindu Temple of Delaware.

"It's the deity of the Lord Hanuman," he said, "who is one of our principal deities in the Hindu religion."

"It's called a statue for now, but will become a deity later on after we go through the religious ceremonies," Mathur continued.

This day was years in the making. It is the vision of the president and board of directors of Delaware's Hindu Temple.

"And so we said, 'Why don't we just make it the largest one in the continental United States?'" said Mathur.

"It was crafted by a number of artisans that are very specialized in the skill, that we call shilpis. It took more than a dozen of them working full-time for more than a year to make this thing happen. This is made from just one solid block of granite," said Mathur.

"It is only done by those people, number one, that are authorized," he said, "but also people who have the skill - which is a skill that's passed on from generation to generation."

"It is not just taught to anybody," Mathur said. "It's passed on from father to son... and so the people that did this, that's all they do. That's all that they've been doing for generations."

The 25-foot tall statue was created in a small town in southern India, traveled to New York by ship, and then by flatbed to Delaware, to the state's largest Hindu temple.

"The deity will be installed here. Along with that there will be a small temple, about 1,500 feet, that will house not just this one on the top, but there will be three smaller deities," said Mathur, "and this meditation garden will be open to the public."