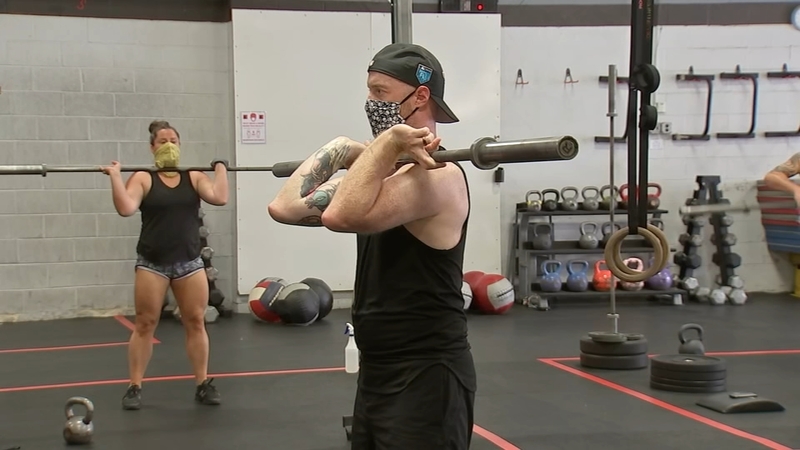 PHILADELPHIA (WPVI) -- Gyms and fitness centers are open again in Philadelphia, but with some changes. Members are required to wear masks at all times, socially distance and class sizes are significantly smaller.

At Fearless Athletics in South Philadelphia said they've been preparing for this day.

On reopening day, you're greeted at the door with a temperature check and assigned to a work out section, a 10-by-10 foot box, outlined in red tape.

"Each member gets an assigned workout area that's pre-loaded with equipment to use," said owner Wil Vicinus.

Fitness classes in Philadelphia can hold up to 10 people. At Fearless Athletics, they've limited class size to eight members who must sign up beforehand.

Outside the art museum, trainers Brandon Williams and Brian King are taking advantage of the hot weather.

"When you're working out in these temperatures it's like a weight on top of you, an added weight pushing down on everything," said King, of BKK Fitness.

Clients say they feel more comfortable outside in the oppressive heat, rather than inside a gym.

"As of right now no. I just feel like it going to be too clustered, with the capacity and the masks. I know there's going to be a lot of new rules, so personally, for me, I'd rather wait," says Tiara Johnson of Levittown.

The space that once held classes up to 50, now preparing for a 10 person class. Each piece of gym equipment must be socially distanced.

"It's a challenge because we don't have a space big enough, so we might have to take some equipment out," says Watts.

Watts Fitness Studio is planning for an early August opening.

The announcement that gyms could open today only came last Thursday, leaving gym owners with only four days to prepare.

Still, gym owners are glad they can get back to business, the safe way.

Restaurant owners want to get back to indoor dining

There hasn't been any dancing or dining inside Cuba Libre in Philadelphia's Old City. But co-owner Barry Gutin thinks it's time to at least have people in to eat.

An Old City restaurant owner says if gyms can open, he certainly believes restaurants can, even if it's 25% capacity.

"We understand why the bars aren't open and people aren't allowed to crowd around those situations, no night clubs and such. But people sitting and being served at tables, we don't think that's an additional risk," he said.

Gutin says if gyms can open, he certainly believes restaurants can, even if it's 25% capacity.

"We're glad the gyms are getting open, they're having a hard time also. People who make a reservation together generally they're from the same household," he said.

Health officials say gyms can open and restaurants can't because of masks.