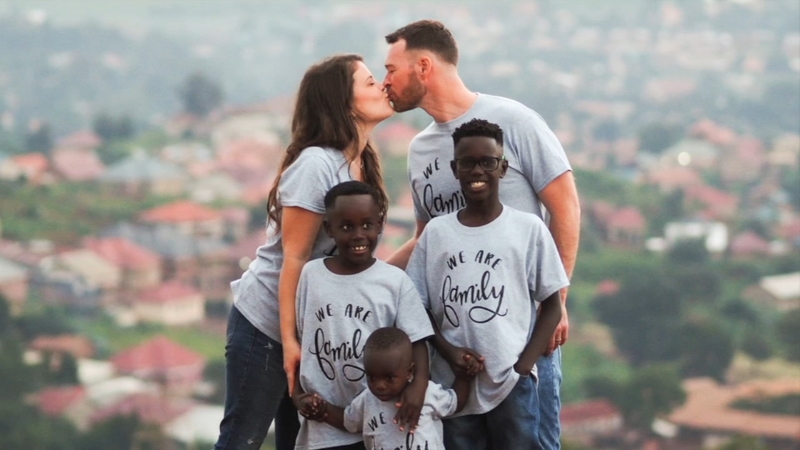 HOUSTON, Texas (WPVI) -- Laura and Bryan Chaffin's lives were made whole with the adoption of their three sons Elijah, David, and Jonah.

But after a serious accident in 2018, Laura desperately wanted to find the words, but couldn't.

"I don't even remember the accident," Laura said.

Together since the ninth grade, Bryan and Laura always knew adoption was in their plans.

In 2014 they adopted Elijah from the Amani Baby Cottage in Uganda.

In 2016 Uganda changed its laws. Anyone wanting to adopt from the country had to agree to live there during the adoption process.

"And then, over the next year, we just slowly sold our house. We sold our cars. We started to fundraise. We sold lemonade to pay for his adoption. We did everything we could, and we ended up raising and saving enough money, and we moved to Africa," Laura said.

They lived in Uganda for the next 17 months as the resident directors of the baby cottage.

As the adoption of David and Jonah was almost complete, Bryan and Elijah flew home to the U.S. to start up the next school year, while Laura stayed behind.

The accident happened just one day before the three planned to leave Uganda.

"I was holding Jonah and we were going to pick up David from a birthday party and another motorcycle hit the back of our motorcycle," Laura said.

"I broke in half all the lower muscles in my back and I fractured my skull right where you put a ponytail. It cut it right open. And then, I had three bleeds in the left side of my brain," Laura said.

Weeks after returning to the U.S., Laura began her fight.

"She stepped in here and told me her goal was to go back to teaching, so I knew we had to hit the books hard per say, because we knew that was her goal and right away, treatments began right away, and in a functional way," Speech Pathologist Veronica Garcia-Lechuga said.

She was accepted into the TIRR Memorial Herman Challenge Program, which helps survivors learn how to live with a brain injury.

She brought in her own lesson plans and materials from her classroom to learn from.

The teacher became the student.

"I would always tease her, and I say the reason you were just the best patient to work with is because you were a teacher, and she had those expectations for her students, and I felt, in that same regard, she was a hard working student," Garcia-Lechuga said.

After graduating, Laura returned to the classroom at the very school where she worked before leaving for Uganda.

"You can either try to live a safe life, or live a life that makes you strong. This whole experience has definitely not been safe but it's made us strong," Bryan Chaffin said.

They say a picture is worth a thousand words, but sometimes the love is clear, and no words are needed.

Just this week, Laura was accepted to the master's program for the College of Education at the University of Houston.