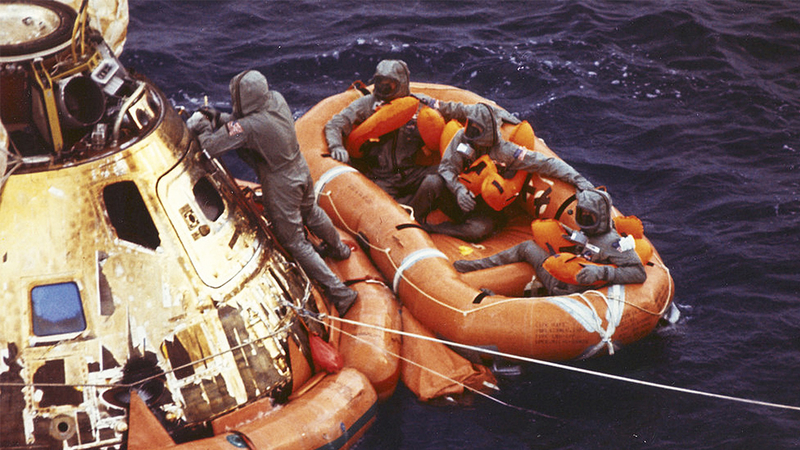 ALAMEDA, Calif. -- The crew of the USS Hornet had just finished a tour of duty destroying mines in Vietnam and when it got the call in early June of 1969.

It was a totally different assignment that would put them face to face with history -- the recovery of the Apollo 11 astronauts once they returned from their mission to the moon.

"The crew was not happy when they got the orders to return," said Bob Fish, an Apollo historian and a trustee of the USS Hornet Museum. "But then word came that President Richard Nixon was actually going to visit and the morale suddenly switched completely. It was like, 'Oh my god, we're going to get to meet the president of the United States and the first men to walk on the moon."

The USS Hornet left from Long Beach and headed to Pearl Harbor to begin training for the delicate recovery mission. They had more than a month to practice. In that time, they conducted 26 simulated recovery exercises. It was intense work and strange work that they were not used to performing. The ship left Pearl Harbor and continued training in the north Pacific Ocean before the Apollo 11 crew even blasted off for space.

We're celebrating the #Apollo50th anniversary and you can join us online from anywhere and in communities from coast-to-coast. Watch our broadcasts and visit local events that look at Apollo every day this week. See the schedule: https://t.co/TUG4K58tz8 pic.twitter.com/a85oWbTWMV

John McLachlen was a demolition swimmer helping destroy mines in Vietnamese rivers. He was reassigned and began training to be one of the few swimmers that would meet the Apollo 11 command module after it came back to Earth. He would have to attach a flotation device to keep it from sinking into the Pacific Ocean.

He was in one of the Navy recovery helicopters when Apollo 11 reentered earth on July 24, 1969.

"We're up there steaming around in circles and then we looked over on the horizon and we could see the command module reentering. It was a fireball with a long comet tail behind it," said McLachlen, who dove from the chopper into the ocean with the flotation device in hand and then swam up to the module.

Larry Silva was watching the whole ordeal from the deck of the USS Hornet. He was 19 years old and had just joined the Navy seven months before. He was tasked with pulling cables for an ABC News camera crew that was filming the historic event.

"We were quite a way from the splashdown because we had the president on board. We didn't know about moon germs so they wanted to stay back a ways," said Silva, who is now a docent at the USS Hornet Museum in Alameda, California.

VIEW A U.S. NAVY TRAINING FILM WITH RARE FOOTAGE ON THE APOLLO RECOVERY


After he pulled the cables, he had free time and took pictures of the module as it was hoisted onto the USS Hornet and of President Nixon as he was getting ready to leave the ship. It was then that he noticed something that made his heart race.

"My job was to make sure the president didn't trip on the cable. But he made the wrong turn. I thought, he's not supposed to be doing that. I just knew somebody was going to fall down, but it never happened," said Silva. The president and Navy Admiral John McCain walked near the cable but did not trip and Silva felt relieved.

"It's insane," said Fish of the USS Hornet crew. "These guys were literally in heavy duty combat seeing their friends get killed one day and just weeks later, they're standing in front of a television camera with the command module behind them and the whole world, 500 million people looking at it."

49 years ago, human first set foot on the Moon. The USS Hornet as the Prime Recovery Ship of the #Apollo11 space mission, played a vital role in it having recovered the astronauts upon returning from the mission. USS Hornet was also the prime recovery ship of Apollo 12. pic.twitter.com/TFEK1ivjay