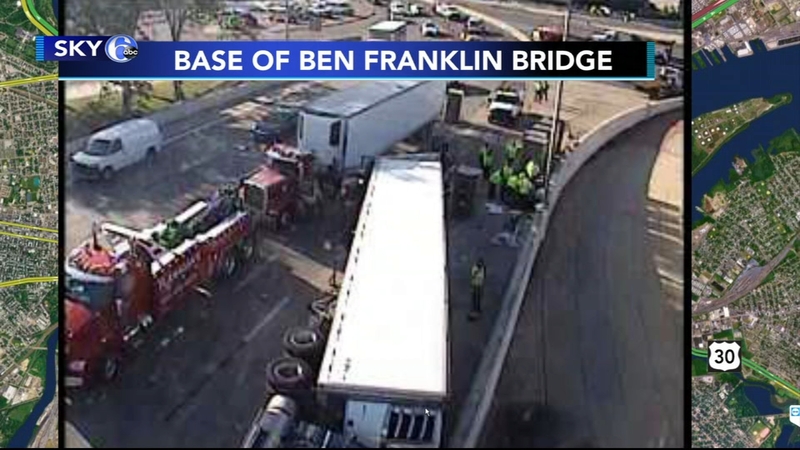 A tractor-trailer carrying pretzel dough overturned on the base of the Ben Franklin Bridge around 4:30 a.m.

Westbound traffic was jammed going into Old City. Drivers were advised to stick to the Betsy Ross or Walt Whitman bridges.

An overturned tractor trailer flipped over trying to round the curve off of the WB Ben Franklin Bridge. This seems to happen so often. Expect big delays. @6abc pic.twitter.com/Nv36Gdw1Vn

Crews worked to remove the load off the truck before they could right the vehicle.

Around 10:30 p.m. Wednesday, another tractor-trailer went through the barrier of the Northeast Extension of the Pennsylvania Turnpike in Bucks County, shutting down both sides.

Not one, but 2 accidents on the Northeast Extension creates big delays and closures. Stick to Rt. 309 instead. @6abc pic.twitter.com/071Kmee1M9

One person was taken to the hospital in unknown condition.

The crash caused traffic to be detoured between the Leigh Valley and Quakertown interchanges.

Crews worked to remove the truck and replace the damaged barriers.

A second accident occurred in the northbound lanes within the backlog.

Both sides of the turnpike were closed for nearly nine hours. Southbound lanes reopened around 7:30 a.m. Thursday, but northbound lanes remained closed.