Indego bike share: A new way to get around Philly 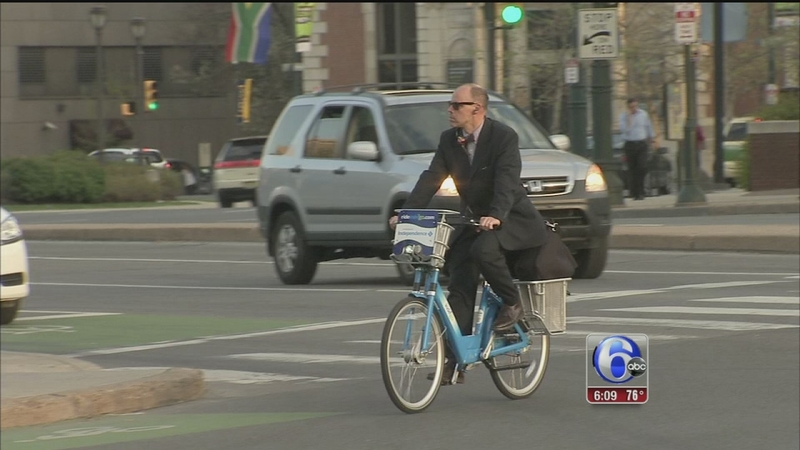 VIDEO: Indego bike share: A new way to get around Philly

PHILADELPHIA (WPVI) -- Bike share has pedaled its way into Philadelphia and it's called "Indego."

Hundreds of the blue and white machines along with dozens of bike stations have been popping up in one neighborhood after another.

The unique name was inspired by the birthplace of the nation and the title sponsor Independence Blue Cross.

Lauren Entler of Fairmount was one of the first members. "I have a bike too but for days that I don't want to leave it in the city and have the risk of getting stolen, it's quick and effective," she said.

It's a $3 million investment by the city which owns and operates Indego through the Mayor's Office of Transportation and Utilities.

The department's chief of staff Andrew Stober says riders can get a membership for $15 a month and use a fob to release a bike from solar-powered stations.

Members can take as many one-hour trips as they want.

People without a membership can walk up to a station, slide in a credit card and get one of the 3-speed bikes for $4 per half hour.

The city says riders can pick up a bike at one location like South Philadelphia and drop off in another like Fairmount.

The city says the bikes are for anyone including tourists, groups of friends or people heading to and from work but is there are market for Indego in Philadelphia?

Stober says Philadelphians are ready for bike share and they've embraced it.

"It's great for trips that are too far to walk, too short or too inconvenient to ride transit or where it's going to be too hard to park. There are lots of those trips in Philadelphia," said Stober.

"We need stuff that makes traveling from all our great neighborhoods convenient," she said. "Our city is great. It's big. It's spread out. But you want to be able to get from neighborhood to neighborhood within our city and I think it is really easy that way."

Indego took over a vacant warehouse in Kensington where it makes repairs and takes customer service calls. The money generated will run and expand the system into more communities. 180 stations and 2000 bikes are expected in just a few years.