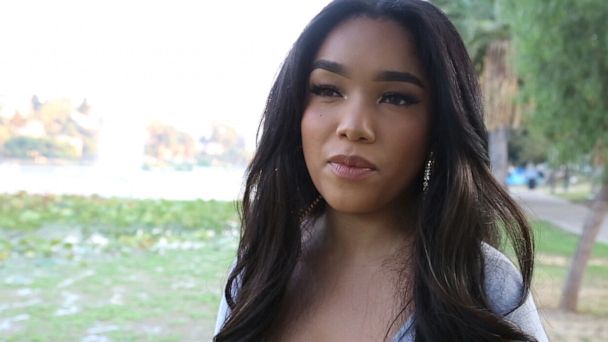 Joslyn Allen, Jaslene Busanet and Eden Estrada weren't fearing for their safety after a night out on Hollywood Boulevard in mid-August. The three friends, all popular influencers on Instagram, were exiting a store in the early hours of Aug. 17 when cellphone video caught a violent, unprovoked attack against them.

Just moments before the attack, the suspect had offered to buy them something. But once inside the store, he refused to pay. He ran out of the store and came back with a tire iron, according to the Los Angeles Police Department.


Onlookers recorded as Allen, Busanet and Estrada, all of whom are transgender women of color, were violently robbed while the man hurled insults and slurs at them.

"I knew this kind of stuff happens all the time to girls like me," Busanet told ABC News. "But I just never thought it could be me. ... I'm no different than any other girl that's trans. I'm a target like everybody else is."

Busanet was trying to catch her breath when someone ran up behind and struck her in the head with a long piece of metal, knocking her to the ground. The attacker then made derogatory remarks about her, according to police.

"I thought I was gonna die," said Busanet. "I was just holding myself in the fetal position and I just thought this is it. I'm gonna be done after this."

As the attack ensued, a crowd of onlookers stood by, recording and some even laughing at the brutal assaults. Many of them were shouting their own transphobic slurs at the women.

"Hit her again!" yelled one of the bystanders as the women were being assaulted.

"You wanna talk about black lives matter, but a black girl is sitting on the floor," said Allen, as she tried to render aid for Busanet, who was crying on the ground after being struck in the head.

Los Angeles police have arrested one of the men suspected in the beating on Hollywood Boulevard, and accused him of a hate crime. Police say they are still searching for another suspect.

"What was particularly callous about these crimes was the actions of the onlookers who recorded and appeared to celebrate the assaults rather than render aid and assist the victims," said Chief Justin Eisenberg of the Los Angeles Police Department.


The assault came amid the most violent year on record against transgender people.

ABC News has independently confirmed 33 violent deaths of transgender and gender non-conforming people in 2020, most recently the death of Sara Blackwood in Indianapolis on National Coming Out Day.

According to the Human Rights Campaign, this is the deadliest year for transgender people on record since they began tracking deaths in 2013.

The previous high, 29, was set in 2017, according to a report from the Human Rights Campaign.

The term "at least" is often used in tracking deaths deaths in the transgender and gender non-conforming community, because many of these violent incidents are either unreported or misreported.

Activist Milan Nicole Sherry added that many deaths go unreported because victims are misgendered in the media. Police reports and media often refer to victims by their "dead name," or their birth name, rather than their current name, making it more difficult to track their deaths.

Activists across the country have marched in solidarity with the Black Lives Matter movement since the death of George Floyd at the hands of police in late May, sparking conversations about racial justice and equality. Simultaneously, there is a growing call for more inclusion of Black members in the LGBTQ community.

Black and Latino members of the transgender community account for almost all of the deaths on record in 2020.


The increased violence has led to growing concerns about the safety of transgender people in the U.S.

"When one of us is killed, that impacts our community much more distant," said Tori Cooper, director of Community Engagement for the Transgender Justice Initiative at the Human Rights Campaign. "And then when there's 20 and 25 and 30 of us, how much 30 lives lost in one year really impacts the larger community."

"And if we're hitting record numbers of trans deaths while we're in quarantine, what does that say about the ridiculousness of this heightened sense of violence that we're having," Cooper added.

Black transgender Americans have been fighting this abuse for years, dating back as early as the 1960s when Marsha P. Johnson threw the first brick of protest at the Stonewall Inn in New York City, sparking the beginning of the gay rights movement.

More recently, the hashtag Black Trans Lives Matter has called attention to the epidemic of violence in the transgender community. Sherry, a transgender woman and activist from New Orleans, founded the movement and created a new space for activism that's growing worldwide.

"There's no way that Black lives will ever matter when y'all are not inclusive to Black trans lives," Sherry said in an interview with ABC News Live. "It's very hypocritical to sayve'Black Lives Matter,' and then it's crickets when Black trans women are experiencing the same violence."

ABC News reached out to representatives of Black Lives Matter, but have not received a response.