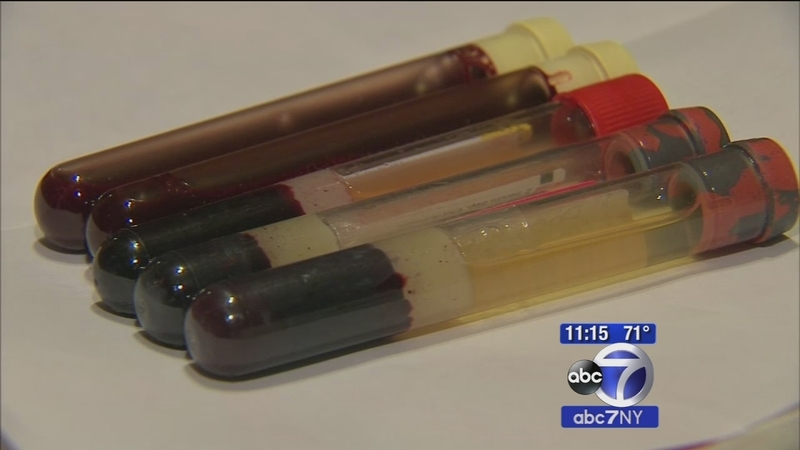 Woman finds vials of blood in her shipment from Target

NEW YORK (WPVI) -- She ordered hair care products from Target but instead got a whole lot more in her delivery, including vials of blood!

So where did it come from, and how did it get there, and whose blood is it anyway?

Allison Henry ordered hair products from Target, but when the box arrived what she found inside was truly vile.

Neatly packaged around her the product she had ordered, she was astonished to find biohazard specimen kits she had not.

Packed inside were five different vials of the same person's blood. And, for good measure, she also found a PlayStation game with a creepy title.

"What a coincidence, a CD named 'Old Blood' and there's blood in the box," Henry said. "Just don't get it. Everyone I speak to about this does not believe me. They're like, blood?"

Allison said she called UPS, Target, and even the lab on the packaging, but no one could explain; much less tell her what to do.

That was, until Eyewitness News got involved and discovered the blood on her kitchen table used to be in Kelly Mikhalik's body.

"You solved my mystery!" Mikhalik said.

It's a test for Lyme disease she overnighted Monday from her office in the Poconos to a lab near Trenton. But somehow, it wound up in the Bronx.

"I would have freaked out if I opened a box that was supposed to have haircare products or something and found vials of blood," Mikhalik said.

So what's the common thread between Kelly in the Poconos and Allison in the Bronx? They were both shipped UPS, and they crossed paths at a sorting facility in Saddle Brook, New Jersey.

"I don't know if the box is open or someone at the warehouse is playing games and they did this," Henry said.

"Maybe it got broken open by accident and they just stuck it in another box," Mikhalik said.

Whatever happened, these two women who've never met just want an explanation for this bloody mess.