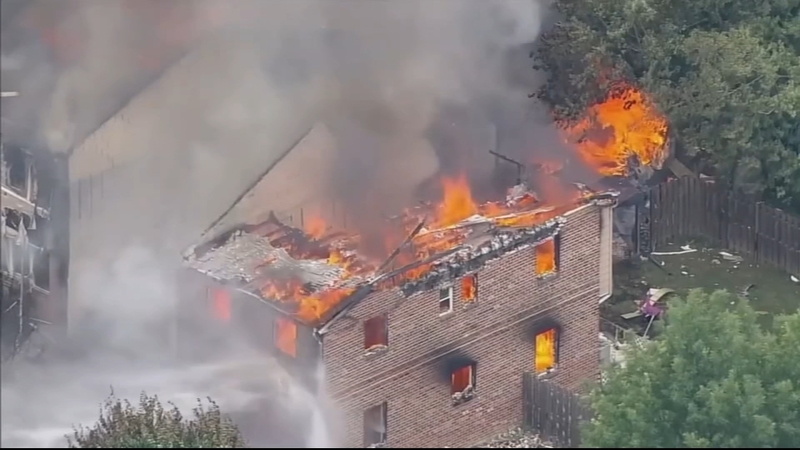 Body of Eagleville homeowner found in rubble after explosions, fire

EAGLEVILLE, Pennsylvania (WPVI) -- The body of the man who witnesses say chased a code enforcement officer with a gun Thursday was found inside the rubble of his Eagleville home shortly before midnight, police said.

The incident began at 11:56 a.m. Thursday when Lower Providence Township Police Officers received multiple 911 calls from witnesses about a man chasing the officer with a gun.

According to investigators, the code enforcement officer went to the home to perform a follow-up inspection at the home for known hoarding conditions.

Police provided an update after the body of Thomas Razzi, 66, was found inside the rubble of his Eagleville home.

At noon, two Lower Providence Township Police Officers arrived on scene and confronted Thomas Razzi, 66, in front of his home and ordered him to stop. He was unarmed at the time, but retreated into his home, police said. Additional officers were called in to assist.

A short time later, police said a series of loud explosions and gunfire were heard coming from the home. The suspect and police did not exchange gunfire, but flames and smoke were immediately visible.

The fire destroyed three townhomes and caused damage to three others. Displaced residents have been assisted by the Red Cross, police said.

Multiple homes went up in flames in Eagleville, Pennsylvania on Thursday afternoon after authorities say a code enforcement officer encountered a homeowner who was allegedly armed with a weapon.

After hiding in her basement, Hannah Maze, who lives nearby, saw police outside her front window.

"I was banging on my window, 'I am home alone home alone, help.' They escorted me with a shield to the SWAT truck," she said.

Neighbors say Razzi was acting odd in the days leading up to the ordeal.

A neighbor's surveillance camera captured him in the yard at 2 a.m. wandering around.

The code enforcement officer received minor injuries and was treated and released from an area hospital.

According to a preliminary investigation, the cause of the explosions and gunfire were likely the result of chemical substances being mixed to make illegal fireworks and ammunition exploding.

The investigation is ongoing and anyone with information is asked to contact the Lower Providence Township Police Department at 610-539-5901.