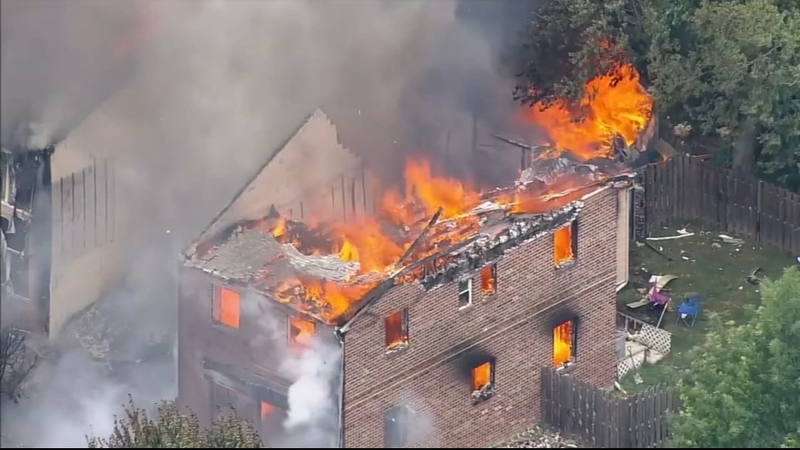 EAGLEVILLE, Pennsylvania (WPVI) -- Multiple homes went up in flames in Eagleville, Pennsylvania on Thursday afternoon after authorities say a code enforcement officer encountered a homeowner who was allegedly armed with a weapon.

It happened during what police are calling a "follow up inspection" just before 1 p.m. near a home on the 4000 block of Cardin Place.

After the homeowner displayed a firearm, additional officers responded and engaged with the man before he retreated back into the home, according to Lower Providence Township Police Chief Mike Jackson.

Jackson did not provide details of any possible code violations or the reason for the inspection.

Soon after, there were a series of explosions. Jackson said three homes caught on fire. One person sustained minor injuries.

A search for the homeowner is still ongoing, but there is no danger to the community, police say.

"As of right now, we are trying to locate the individual who may or may not be inside the residence," said Jackson.

Views from Chopper 6 showed plumes of smoke billowing into the sky after the reported blast.

Chopper 6 video: Crews are battling a large fire while responding to an active investigation in Eagleville, Montgomery County.

The fire damaged the home of Imane Lotfi and Elsayed Elsayed who live next door. They say their 6, 9 and 14-year-old kids were at home remote learning and were saved by police.

"He put his life at risk. He made everybody safe in the neighborhood," said Elsayed.

The couple says the man, who they know only as a neighbor, had been acting strange recently.

"He sounded like he was sad for the last two weeks. He's upset, sad -- like desperate," said Elsayed.

Multiple homes went up in flames in Eagleville, Pennsylvania on Thursday afternoon after authorities say a code enforcement officer encountered a homeowner who was allegedly armed with a weapon.

They say their surveillance camera captured the suspect digging in his yard at 2 a.m.

"He was digging next to the wall...like with his hand," said Elsayed.

The incident forced nearby residents to shelter in place, but the order was lifted.

Police have not identified the man that is being sought by police.

Anyone with information is asked to call Lower Providence Township Police.