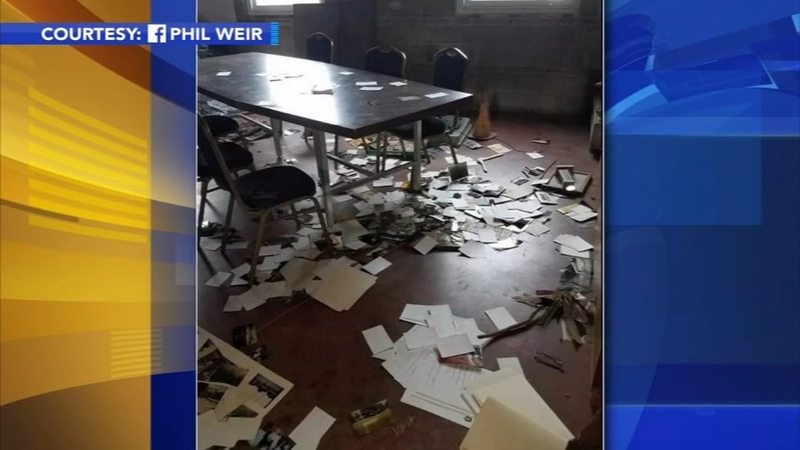 ROSELLE, Delaware (WPVI) -- Troop leaders finally have their room at the Christ United Methodist Church cleaned up. It took them many hours over the last few days, but projects and other belongings were destroyed.

Not only that, there's a sense of sadness, anger, and dismay that someone would target this special place where Troop 54 has gathered for generations.

Scout Master Phil Weir found the room where Troop 54 gathers for activities in complete disarray when he arrived to pick up some paperwork on Monday evening.

"I popped my head in the door and everything was... Somebody came in here and ransacked everything," Weir said.

It's the dirty work of vandals. In the room where generations of Boy Scouts have gathered inside Christ United Methodist Church on North Clifton Avenue in Roselle many precious projects and belongings - some dating back decades - had been damaged or destroyed. Items were strewn everywhere.

In fact, the troop first started there in the 1930s.

Weir became a Boy Scout there, as did his now-grown son. He and many other adults give their time to provide a positive experience for young boys.

Jessica Good's 6-year-old son, Liam, is in the pack.

Adults spent hours getting it all cleaned up. They couldn't bear for the Boy Scouts to see their safe place ransacked for no apparent reason. Now, they're hoping whoever did the damage comes forward.

"Honestly, I just hope that they have some kind of guilt trip and call somebody and say, 'Hey, I screwed up and did something.' Admit up to it," Weir said.

The vandals destroyed the troop's copier. They slashed their tents with knives, so the September camping trip is now canceled.

New Castle County Police are investigating. They dusted for fingerprints and collected other evidence in hopes of finding whoever is responsible.