Theresa May resigns, sparking contest for Britain's next prime minister amid Brexit battle 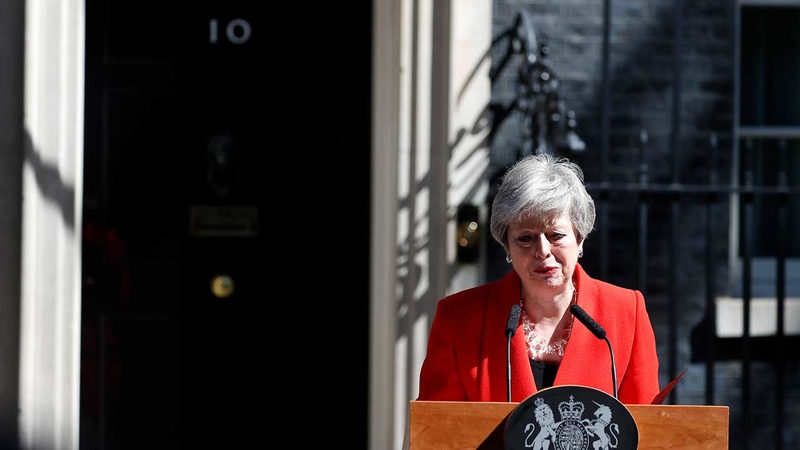 LONDON -- Bowing to the inevitable, Theresa May announced Friday that she will step down as U.K. Conservative Party leader in two weeks, admitting defeat in her attempt to take Britain out of the European Union and sparking a contest to replace her as prime minister.

May said she will quit as head of the governing party on June 7 but stay as caretaker prime minister until the new leader is chosen, a process the Conservatives aim to complete by late July.

The new Conservative leader will become prime minister without the need for a general election, and will take up the task of trying to secure Britain's exit from the EU.

May, who has been battling to unite her fractious party ever since she took the helm almost three years ago, said "I have done my best." But she conceded that had not been enough.

Her voice breaking, May said in a televised statement outside 10 Downing St. that she would soon be leaving a job that it has been "the honor of my life to hold."

May became prime minister the month after the U.K. voted in June 2016 to leave the European Union, and her premiership has been consumed by the attempt to deliver on that verdict.

May spent more than a year and a half negotiating an exit agreement with the EU, only to see it rejected three times by Britain's Parliament.

Many Conservative lawmakers came to see May as the main obstacle to leaving the bloc, although her replacement will face the same issue: a Parliament deeply divided over whether to exit the EU, and how close a relationship to seek with Europe after it does.

Now she has quit over her failure to take Britain out of the EU on the scheduled date of March 29. Britain is currently due to leave the EU on Oct. 31, but Parliament has yet to approve divorce terms.

"I negotiated the terms of our exit and a new relationship with our closest neighbors that protects jobs, our security and our Union," May said. "I have done everything I can to convince MPs to back that deal. Sadly, I have not been able to do so."

"It is now clear to me that it is in the best interests of the country for a new prime minister to lead that effort," she added.

Multiple contenders are already jockeying to replace her and take up the challenge of securing Britain's EU exit. The early front-runner is Boris Johnson, a former foreign secretary and strong champion of Brexit.

Pressure on May reached breaking point this week as House of Commons Leader Andrea Leadsom quit and several Cabinet colleagues expressed doubts about the bill she planned to put before Parliament in a fourth attempt to secure lawmakers' backing for her Brexit blueprint.

Leadsom, another likely contender to replace May, joined colleagues in paying tribute to the departing leader. She tweeted that May's "dignified speech" had been "an illustration of her total commitment to country and duty. She did her utmost, and I wish her all the very best."

Johnson, whose relentless criticism helped push May out of the door, tweeted: "Thank you for your stoical service to our country and the Conservative Party. It is now time to follow her urgings: to come together and deliver Brexit."

But Johnson, or any other successor, will face a tough challenge to unite a country and a Parliament still deeply divided over the country's relationship with Europe.

The next British leader is likely to be a staunch Brexiteer, who will try to renegotiate the divorce deal, and if that fails to leave the bloc without an agreement on departure terms.

Most businesses and economists think that would cause economic turmoil and plunge Britain into recession. Parliament has voted to rule out a no-deal Brexit, though it remains the legal default option.

Scottish First Minister Nicola Sturgeon, an opponent of Brexit, tweeted that May's exit "will not solve the Brexit mess that the Tories have created. ... The prospect of an even more hardline Brexiteer now becoming PM and threatening a no deal exit is deeply concerning."

European Commission President Jean-Claude Juncker praised May as "a woman of courage" for whom he has great respect.

EU spokeswoman Mina Andreeva said Juncker would "equally respect and establish working relations" with any new British leader. But the bloc insists it will not renegotiate the Brexit deal.

"We have set out our position on the withdrawal agreement and on the political declaration," Andreeva said.

Dutch Prime Minister Mark Rutte tweeted that the "agreement reached between the EU and the United Kingdom for an ordered Brexit remains on the table."

Angela Merkel's spokeswoman, Martina Fietz, said the German chancellor noted May's decision "with respect" and would continue to work closely with her successor for "an orderly exit."

In an emotional departure speech, with close aides and her husband Philip looking on, May said "I will shortly leave the job that it has been the honor of my life to hold - the second female prime minister but certainly not the last."

"I do so with no ill will, but with enormous and enduring gratitude to have had the opportunity to serve the country I love."
Report a correction or typo
Related topics:
politicsbrexittheresa mayeuropelondon
Copyright © 2022 by The Associated Press. All Rights Reserved.
TOP STORIES
AccuWeather: Nor'easter on the way; expected snow varies across area
Coastal communities under Blizzard Warning starting Friday night
Philly man's quick-thinking leads police to arrest NJ murder suspect
Police: Delivery driver shoots attempted carjacker 6 times in Philly
5-year-old boy found by good Samaritan after boarding wrong bus
Surveillance video shows altercation that led to Coatesville shooting
Best places to get a bagel in Philadelphia
Show More
4 sets of brothers compete on Drexel's wrestling team
Toddler credited with saving family of 7 from devastating house fire
Embiid scores 26, leads 76ers past LeBron-less Lakers 105-87
'The Ice Age Adventures of Buck Wild' heading to Disney+
Delco man lucky to be alive after hit-and-run outside home
More TOP STORIES News