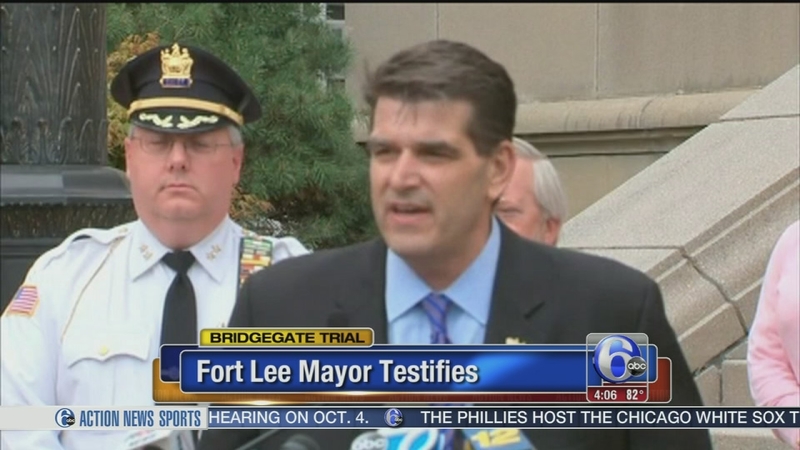 NEWARK, N.J. (WPVI) -- The Democratic mayor who prosecutors say was targeted by two former allies of Republican Gov. Chris Christie for a political vendetta told jurors Tuesday how he was courted by Christie staffers for more than three years before ultimately declining to endorse Christie's re-election.

Fort Lee Mayor Mark Sokolich testified he told a Christie staffer about his endorsement decision in the late summer of 2013, weeks before traffic jams at the George Washington Bridge plunged the town into four days of gridlock.

Bill Baroni, a Port Authority of New York and New Jersey official, and Bridget Kelly, Christie's former deputy chief of staff, are charged with civil rights violations, conspiracy and wire fraud. Prosecutors say they caused the traffic jams by reducing the number of access lanes to the bridge from three to one without notifying Fort Lee officials.

Sokolich recounted Tuesday how he called and texted Baroni, Christie's highest appointee to the agency that operates the bridge, on the first two days of the traffic jams but received no response. In one voicemail played in court, he pleaded with Baroni: "I can't get the kids to school. Please give me a call back. We're in total gridlock."

Prior to that week in September, Sokolich testified, his relationship with Baroni and members of Christie's staff was more than cordial. He described receiving invitations to parties, New York Giants football games and a lunch at the governor's mansion in Princeton, beginning soon after Christie took office in early 2010.

One of the perks was a special tour of the still-under-construction 1 World Trade Center tower. On a separate visit to the 9/11 memorial, Sokolich testified, he met David Wildstein, the former Port Authority official who pleaded guilty last year in the scheme and will testify for the government.

Wildstein told Sokolich, "So you're the guy we have to be nice to," Sokolich testified. "He said it multiple times within the initial minute of meeting him. So it stuck out in my mind."

Christie wasn't charged and has denied advance knowledge of the scheme. But in opening statements Monday, prosecutors said Wildstein will testify that he and Baroni bragged about the scheme to Christie at a Sept. 11 memorial event on the third day of the closures.

Christie didn't answer reporters' questions Tuesday at an event opening a cancer institute in Newark. Instead, he counted the opening of the cancer center as a hallmark of his legacy after two terms as governor.

Earlier Tuesday, Fort Lee Police Chief Keith Bendul recounted meeting Robert Durando, the Port Authority official in charge of the bridge, in a municipal lot on the first day of the lane realignment.

Bendul said Durando told him not to meet him at the Port Authority's building in Fort Lee, a request Bendul considered "weird, cloak and dagger." Bendul said when he upbraided Durando about the new traffic pattern that reduced access lanes between Fort Lee and the bridge, Durando told him, "Have the mayor call Baroni."

Bendul called the traffic the worst since 9/11. He testified he told Durando he was dealing with "a missing 4-year-old, a cardiac arrest," plus numerous road rage incidents.

Bendul testified he warned Durando: "If anybody dies, I'm telling them to sue him and everyone at the Port Authority."

Baroni has claimed the realignment was part of a traffic study conceived and operated by Wildstein.