In demand bulletproof backpacks put to the test 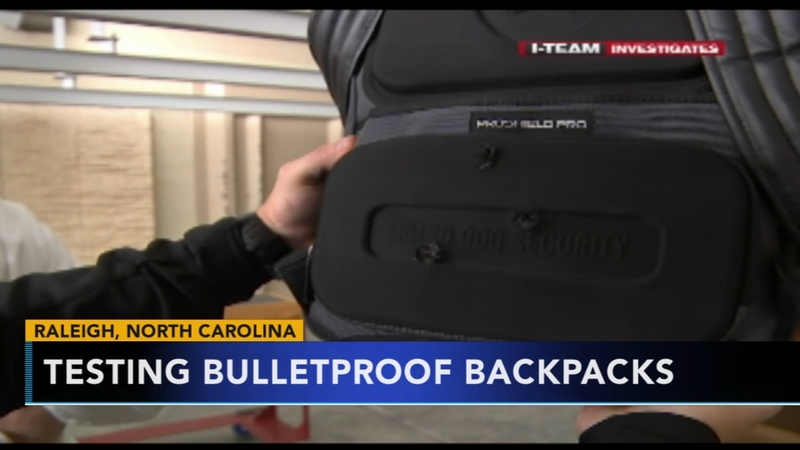 RALEIGH, NC -- Bulletproof backpacks are in high demand as many parents wrestle with how to protect their children from school shootings.

At least one company, Guard Dog Security, reported it has sold six months' worth of merchandise in just three days in the aftermath of the massacre at Stoneman Douglas High School in Parkland, Florida.

"It was something we looked at after Sandy Hook," Yasir Sheikh, president of Guard Dog Security, told sister station WTVD, referring to the 2012 shooting at an elementary school in Newtown, Connecticut. "Interest comes in waves and now there's spike in interest and we're trying to meet the demand."

Hoping to help parents interested in these products, WTVD put a Guard Dog backpack to the test with the help of Triangle Shooting Academy, a full-service gun range, and Capitol Special Police, a prominent security firm out of Raleigh, North Carolina.

Lt. Mike Matthews, a veteran instructor of more than 15 years, brought along several weapons to test the backpack with live fire in a secured setting. Upon first glance, he was impressed by the Guard Dog bag's lightweight feel.

"I guess that's the whole point of it," Matthews said. "If you're a kid, you'd think nothing of this and blend right in."

Matthews tested two handguns - a 9mm and .45. The Guard Dog stopped all rounds.

The Guard Dog backpack stopped two rounds each from a 9 mm and a .45.

Next, Matthews fired a one-ounce slug from a 12-gauge shotgun. The blunt force knocked the bag from its holster, but the Kevlar caught it nonetheless.

How does the Guard Dog backpack fare against the standard police issue Remington 870?

Finally, Matthews fired three rounds from an AR-15 rifle with a standard capacity magazine, the same weapon used in the Parkland, Sandy Hook and Las Vegas shootings. This time, the backpack was no match for the rifle's firepower - and that came as no surprise to Matthews.

How did the Guard Dog backpack fare against fire from an AR-15?

"Not everybody carries armor to stop rifle fire," he explained, showing WTVD the difference between Kevlar and a metal trauma plate used primarily by military personnel. "It won't stop anything that's moving that fast."

Steve Gomez, Security Consultant and News Contributor for ABC News, concurred that only trauma plates will add the kind of protection necessary to stop the ammunition fired from an AR-15 or other high-powered rifles. Still, he said he sees no downside to purchasing the backpack.

It can't stop all common weapons, but a "bulletproof" backpack offers some measure of protection.

"Right now, students are afraid and you want them to feel confident that they have something to protect themselves until police show up or their parents pick them up," Gomez told WTVD. "I think they are definitely worth the investment because, right now, nothing has been done and kids are asking for something to be done. As a parent, if my child is going to school, I want to ensure she has some form of protection and not just ensure that the door gets locked before the shooter comes in.''

Security expert Steve Gomez says the backpack can provide some measure of protection for anxious students.

WTVD did reach out to several law enforcement agencies for their take on the backpack; all of them declined comment.