Neighbors say the driver lost control, hit other cars, smashed through a neighbor's fence, and went into the inground pool.
WPVI
By Beccah Hendrickson 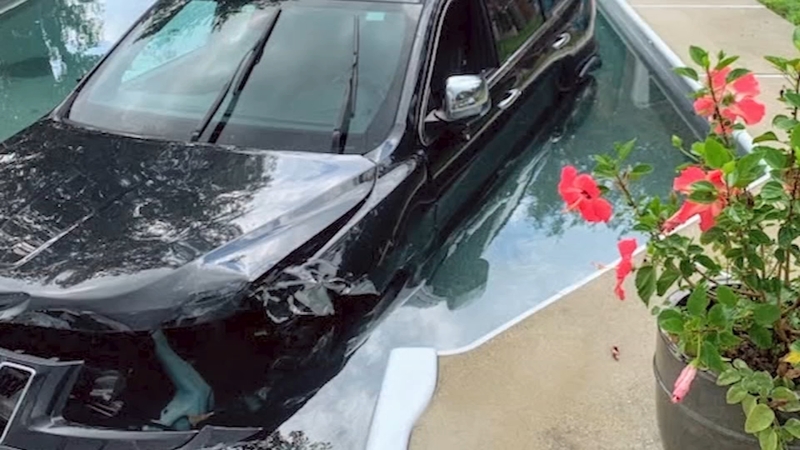 Police say the driver had a medical emergency. Neighbors say the driver lost control, hit other cars on the street, smashed through a neighbor's fence, and went into the inground pool.

"It sounded like a dump truck was dumping a huge load on the street," said Jay Nester.

The driver of the Jeep had rammed through his backyard and through the fence he shares with that neighbor.

"She hit that gold car right there, she came across this yard there, cut through... and knocked down one panel of the back fence and into the inground pool of our neighbor," he explained.

This was so scary! A driver had a medical emergency in a Gloucester Township neighborhood and lost control of the car and ended up in a backyard pool. Thankfully she was able to get out on her own and crews used a massive crane to lift the car over the house @6abc pic.twitter.com/MNGSxUtxF0

This was Monday around noon on Roosevelt Drive in Gloucester Township. Homeowners were not home at the time of the accident.

"It's a busy street, but a quiet neighborhood, so it was the talk of the street for sure," he said.

Later that day, crews rose a crane above the home, lowered rope and hooked it onto the Jeep.

"When the crane came, it was huge and it had to lift the car out of the pool and over the house," said Nestor.

Gloucester Township police are investigating the accident. Officers say the driver who ended up in the pool was able to get out on her own.

"How she made it through without hitting anything else in the yard is pretty amazing. She was lucky, considering the damage, which is not a big deal," said Nestor.

Police say the driver did have minor injuries and was checked out in the hospital.