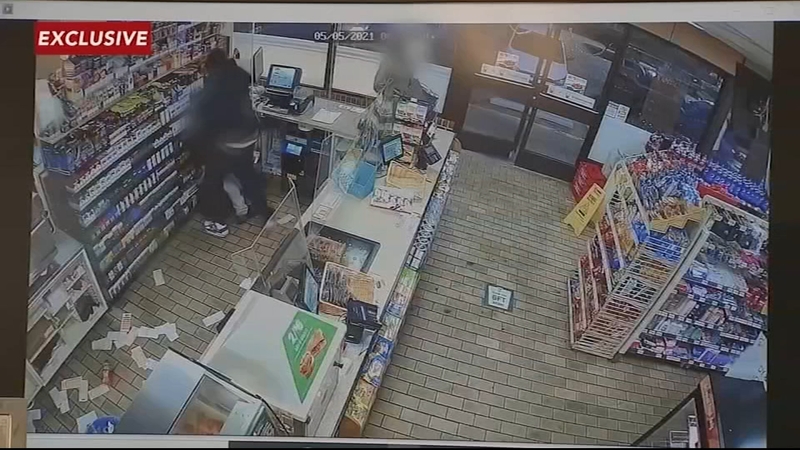 BALA CYNWYD, Pennsylvania (WPVI) -- Officers with the Lower Merion Police Department are looking for a man who was caught on camera assaulting a 7-Eleven store cashier.

Moments before the assault, the store clerk is seen pointing up to the security cameras, warning the man.

The clerk pointed to a sign inside the store that read no money orders after 9 p.m. That's when the owner said the man claimed he wanted the $5,000 back, but the clerk said the man never handed him over any cash to begin with.

"My cashier was pointing, there is a camera here so you didn't give me money, but he was getting upset," said Rahman.

He said the employee pulled out his phone to call him, but he didn't have his reading glasses on, so he was holding his phone at a distance.

"The guy thought that maybe he was filming or taking a picture," said Rahman.

He thinks that's what may have set the man off, knocking over lottery tickets and running behind the counter to attack the clerk.

A woman, who police said knows the man, tried to stop the assault. She got into a car with the man and drove away.

"It's pretty brazen. First of all, the action of throwing what he threw off the counter, and then running around behind the counter, where obviously customers don't go, so obviously we knew something bad was going to happen," said Detective Sergeant Michael Vice.

Rahman said the clerk has face and arm injuries, but he plans to return to work.

Some people in the area said they're not surprised by the bold attack.

"I've lived in this community for 23 years, so, unfortunately, I'm not shocked that some deviant people went in there and caused harm, which I've witnessed over the years living here," said Andi Rose, a Bala Cynwyd resident. "I just feel badly, you know, people want to have jobs, they want to work, and sometimes it's second shift, third shift, and they're violated."