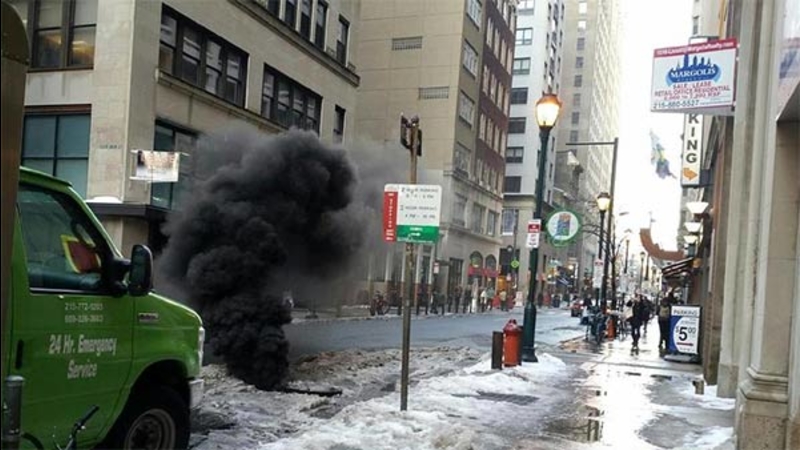 It happened around 5:40 Sunday afternoon at on the 1500 block of Locust Street.

"Manhole cover just kind of blew up - a big ball of fire, a bunch of smoke came out and we could smell something burning," said Kyle Sormilich, witness.

"I smelled something strange. I got up and looked and there was a bunch of smoke - a dark cloud of smoke," said Elicia Warrman.

The explosion triggered the evacuation of a restaurant and a gym across the street.

Members of a spin class were told to leave the building immediately.

"All of us sudden we were in the middle of flywheel. We were told we had to get off the bikes and evacuate, there was an explosion upstairs," said Stacie Seidman.

Peco said that their cable was smoldering causing the pressure to build and finally exploded.

Officials from PECO said one of their underground cables was smoldering which caused pressure to build leading to the explosion.

Crews weren't able to reach the source of the explosion because the hole was flooded with water from the snow melt.

But that wasn't the end of it.

Firefighters found high levels of carbon monoxide in the area caused by the fire. They ventilated the building.

They also checked the 1400 and 1500 blocks of Locust Street and found more elevated levels of carbon monoxide.

That indicated that the fire or smoke was traveling.

No one was hurt and no buildings were damaged.