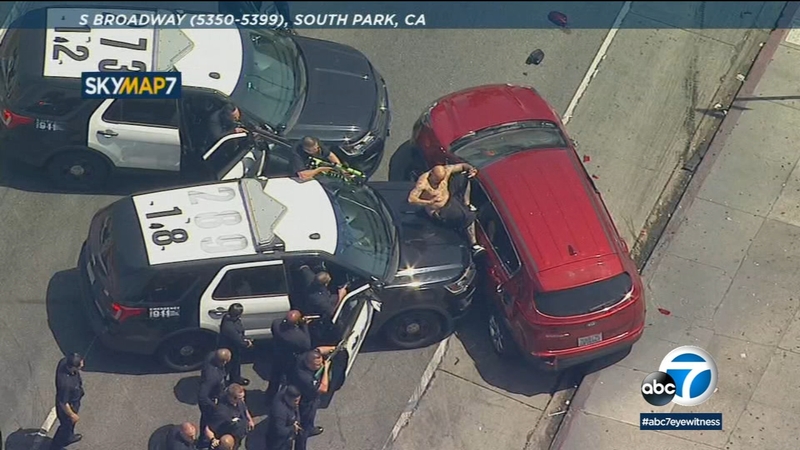 LOS ANGELES -- The driver of a stolen SUV was taken into custody Thursday afternoon after leading authorities on an intermittent chase through Los Angeles, police said.

The shirtless suspect at one point stopped the vehicle in a traffic lane on the 110 Freeway as officers pulled up behind him with their guns drawn.

After a few moments, the driver of the red Kia Sorento continued on.

KABC-TV reports, a few miles later, the heavily tattooed man repeated the same maneuver as the pursuit approached the 10 Freeway.

The suspect stuck his hand out of the driver's side window and made an obscene gesture, then briefly exited the 110 before reentering and heading southbound.

While driving through the South L.A., the man twice stopped the vehicle and shook hands with apparently enthusiastic onlookers.

As the suspect continued driving, a Los Angeles police officer tossed a spike strip in front of the vehicle. The SUV ran over the strip and dragged it while driving in circles.

An LAPD cruiser then slammed into the side of the stolen vehicle and pinned it against an SUV that was parked along a nearby curb.

Several police cruisers swarmed around the Sorento as the driver raised his hands in surrender.

Authorities attempted two PIT maneuvers before the third one helped bring the chase to a stop.

The suspect climbed out of the vehicle and onto the hood of an LAPD vehicle, then was tackled to the ground and handcuffed.

Firefighter-paramedics responded to the scene and were tending to the occupant of the parked SUV that was struck at the end of the chase. The person did not appear to be critically injured but was checked out as a precaution.