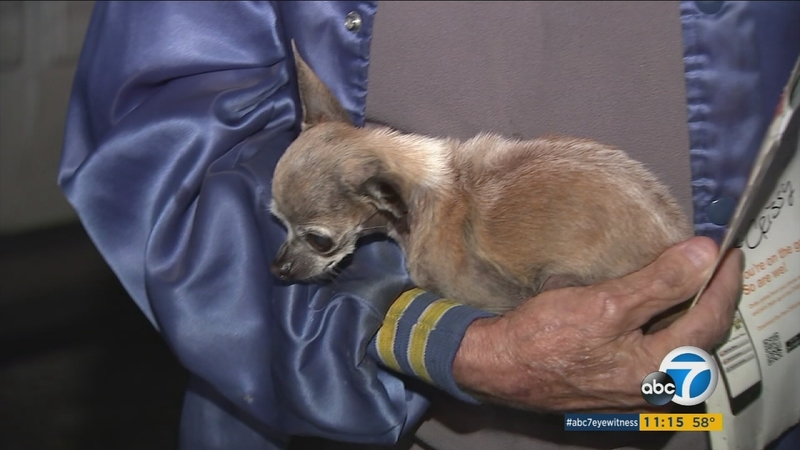 DOWNEY, Calif. -- A 93-year-old World War II veteran was heartbroken after his beloved dog was taken from his front yard in California, but the pair were happily reunited Saturday afternoon.

Roger LeClair said a woman came to his home and took his 12-year-old teacup Chihuahua named Lola last week. The woman claimed to be taking the 1-1/2-pound dog to a veterinarian but never came back.

After his plea to find Lola made headlines, LeClair received many phone calls from people offering to help. A teacher who saw Lola's picture ended up spotting her and called LeClair with the good news.

LeClair said he has had Lola since she was one month old, and he was worried about her health as she was recently put on medication.

He offered a reward for any information concerning Lola's whereabouts, while urging the person responsible to bring his dog home, "no questions asked."

"I miss her so much. She's just the love of my life and she's almost like my heart, you know. And I want her back so bad," LeClair said.

After being reunited with his pet, LeClair said he believed whomever took his companion ended up getting cold feet and set Lola loose in a school yard.

Another veteran from Whittier, named Byron Holtzclaw, was willing to offer a $5,000 reward for the return of Lola, but she was found before he could get the word out. He ended up giving the money to LeClair for dog food for the rest of Lola's life.

"I actually feel his pain. I've seen guys killed in the war, and it didn't hurt me as much as it hurt me to see him with that dog because I think it related to me when I was a kid," he said.