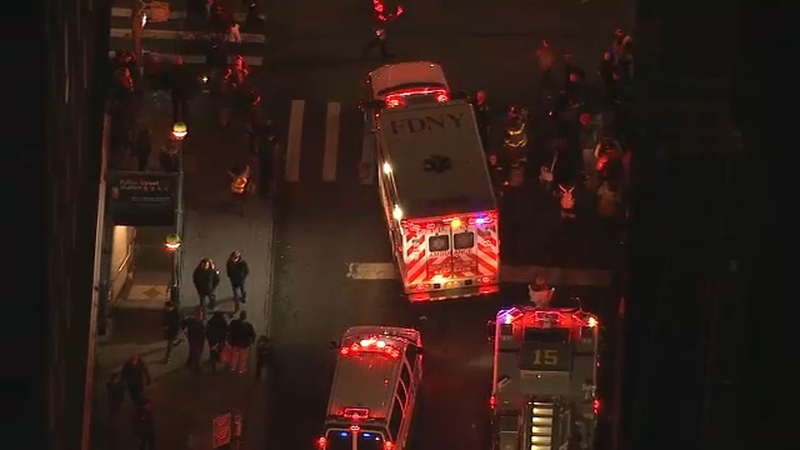 LOWER MANHATTAN (WPVI) -- A 2-year-old boy was struck and killed by an oncoming train in Lower Manhattan during the Wednesday evening commute.

The incident was reported at the Fulton Street subway station around 5:30 p.m.

The boy was taken to the hospital where he was pronounced dead.

Police say his mother was holding bags while walking down the stairs, with the boy walking in front of her.

He made it down to the bottom of the stairs and onto the train platform before her, then approached the oncoming train and was pinned between the platform and the train.

The MTA said there were delays and multiple impacts to 2/3/4/5 train service immediately after the incident, but service later resumed with residual delays.

"NYC Transit and NYPD are investigating a tragic incident at Fulton Street Station where a young boy apparently became separated from his mother and was struck by a northbound number 2 train at 5:36 p.m. The circumstances surrounding the incident remain under investigation. The boy was removed to a local hospital by EMS and was later pronounced deceased. Our hearts break for the family and the MTA is praying for them. Our thoughts are with the crew of the train as well."
Report a correction or typo
Related topics:
child injuredpedestrian strucku.s. & world
Copyright © 2022 WPVI-TV. All Rights Reserved.
TOP STORIES
AccuWeather: Few Snow Showers Sunday
Police investigate 2 deadly hit-and-run crashes in Philly
Police: Man shot, killed in Philadelphia's East Falls section
All 100 lab monkeys accounted for after several escape crash
Montco health department ties 10 hepatitis A cases back to restaurant
Arnold Schwarzenegger involved in multi-vehicle crash
NYPD officer killed, suspect is from Allentown
Show More
How a 73-year-old grandmother outwitted a scam artist
Community organizers use basketball as a resource to curb violence
Shootout at Northern Liberties gas station
Driver dies in fiery crash in Port Richmond
Grocery stores faced with heavy impacts amid supply chain issues
More TOP STORIES News