Christie exchanged a hug and handshake with Cowboys owner Jerry Jones during warmups about 45 minutes before kickoff for the playoff game against the Green Bay Packers. He wore a blue Cowboys scarf with a dark winter coat.

Jones has referred to Christie as his team's "mojo" because Dallas has won the last five games Christie has attended wearing the orange sweater for good luck. The Cowboys, 8-0 on the road this season, can advance to the NFC championship with a victory.

Christie, no surprise, picked the Cowboys to win - 38-28 - and was feeling mighty confident.

"Well, as confident as you can be being on the road and (facing) a team that's undefeated at home," Christie told The Associated Press. "But I feel pretty good. The team's played well, and it's going to be a good day."

However, Green Bay rallied from an 8-point deficit as Aaron Rodgers threw for two fourth-quarter touchdowns to beat Dallas 26-21 Sunday. The Packers (13-4), helped immensely by a video reversal with 4:06 remaining, went undefeated at Lambeau Field this season. They head to Seattle next weekend for the NFC title game.

Christie's office said the governor sat in the owner's box with Jones.

Before he went upstairs, Christie posed for pictures on the Dallas sideline near the 35-yard line. He walked off the field and entered the Packers' tunnel behind Green Bay running back Eddie Lacy before heading to his seat.

Christie wasn't the only potential 2016 presidential candidate at Lambeau on Sunday.

Wisconsin Gov. Scott Walker was also at the game. He was decked out in Packers gear, from a green jacket to a green wool knit cap.

Christie and Walker were trading friendly barbs on social media the past week. Christie said before the game he had only exchanged texts with Walker on Sunday, but hoped the two prominent Republican governors could get together.

Christie has faced ethical questions since his office disclosed that Jones had been paying for Christie's box seats and private jet flights. Christie's office has said the governor was paying his own way this time to Green Bay.

The governor's passion for the Cowboys also has drawn from outrage from fans in New Jersey of the Eagles, Giants and Jets fans. They're angered he isn't backing one the area's teams. 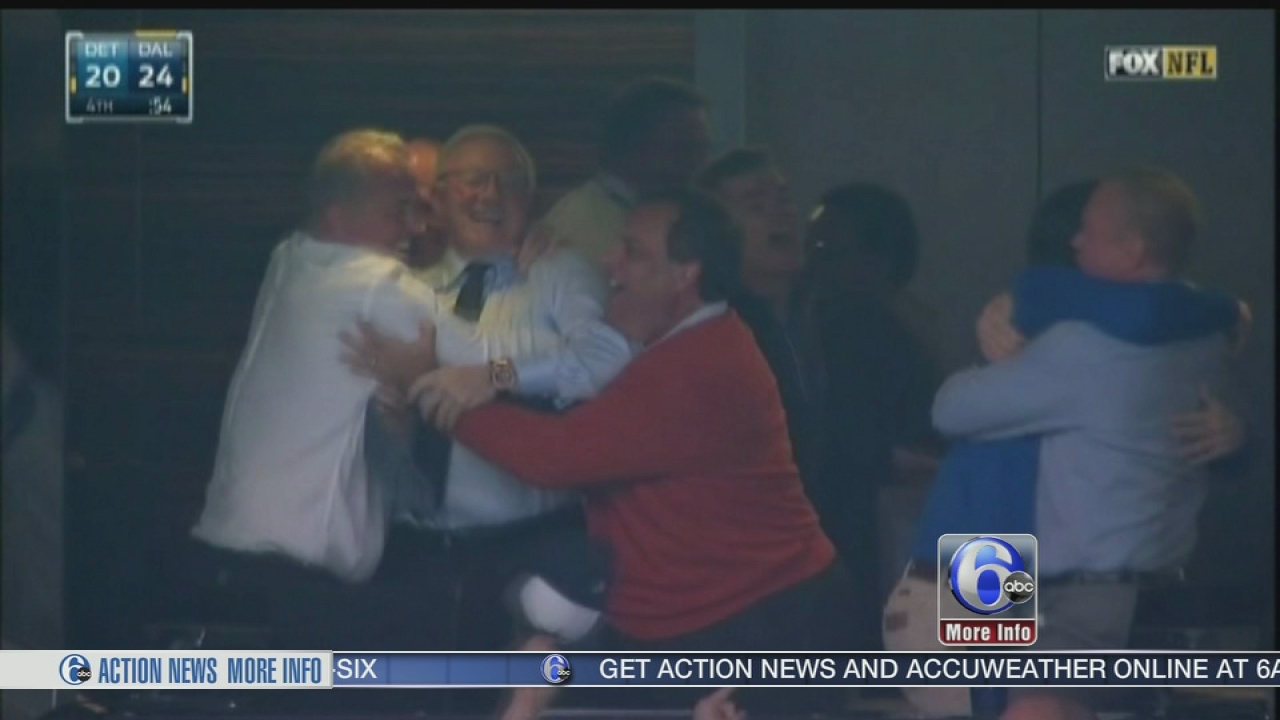