Action News was at one of the rallies in Doylestown, Bucks County.
WPVI
By 6abc Digital Staff 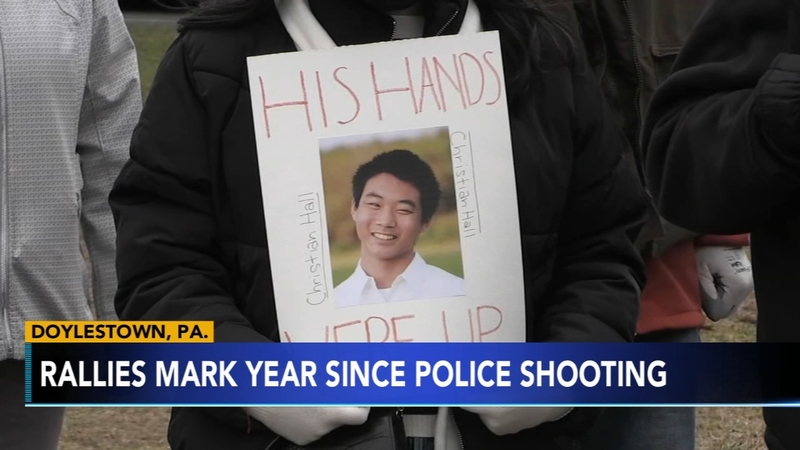 DOYLESTOWN, Pennsylvania (WPVI) -- Rallies held Thursday night across the Philadelphia area and overseas called for justice for Christian Hall after his killing one year ago in the Poconos.

Hall, a 19-year-old Chinese American, was shot to death by Pennsylvania State Police on Dec. 30, 2020, in Hamilton Township, Monroe County.

Action News was at one of the rallies in Doylestown, Bucks County.

The crowd called for an independent investigation into Hall's death.

State police had responded to the call about a "possible suicider" on the State Route 33 overpass to I-80. When troopers arrived, they saw a gun in Hall's hand.

Video previously released by the Monroe County District Attorney's office showed Hall's hands were in the air, then the video is blurred before he's shot.

An unredacted video released in November, which Hall's attorneys obtained through a subpoena, shows that in the last seconds of his life, Hall's hands remained above his head while he continued to hold onto the gun.

Calls are growing Thursday for an independent investigation into the shooting of a Chinese American teenager by Pennsylvania State Police last year in the Poconos.

Vigils were held in ten cities worldwide on Thursday including Philadelphia, Downingtown, New York, Los Angeles, and Abra in the Philippines.

"We're doing this to have those who need to be accountable, be made accountable. So that there will be change," Fe Hall said. "That cases like this, where there are killings that involve the police, there has to be an unbiased, independent investigation right away. That law has to be changed."

"Like many transracial adoptees, Christian battled ongoing trauma stemming from his adoption. What he needed was support and understanding, but instead he was gunned down with his hands up," vigil organizers said in a social media post.

Hall's family says mental health experts, not police, should have been called to the scene.

A rally was held in the Poconos on Saturday after new, unedited video was released showing a Chinese American teenager fatally shot by police.