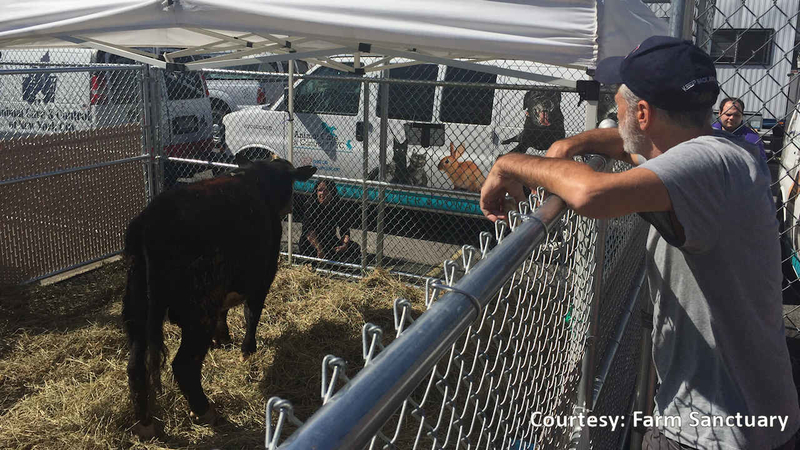 JAMAICA, Queens (WPVI) -- Police were called in to corral a bull on the loose in Queens Friday morning. Fortunately, this story has a happy ending thanks to the former host of "The Daily Show" Jon Stewart.

It was a long day Friday for the escaped bull, nicknamed Frank Lee after the prisoner who escaped from Alcatraz.

The black and white Angus concocted a well-devised plan and escaped from a Queens Slaughter house around 10:15 a.m.

The bull enjoyed a bit of freedom on the York College campus on Archer Avenue in Jamaica, Queens. As an audience grew, he was lassoed twice and tranquilized with darts.

"There was a guy swinging his rope, he was going to catch it. He looked pretty confident, I was scared," an eyewitness said.

"I kind of want to keep it. We have enough grass here for him to roam around. That would be nice," said Julian Lopez, an eyewitness.

The bull was driven by former "Daily Show" host Jon Stewart and his wife, Tracey, to Farm Sanctuary, a national organization dedicated to protecting farm animals. By Friday afternoon, "Frank Lee" was loaded up and driven by the Stewarts to upstate New York.

The Stewarts have partnered in the past with Farm Sanctuary. "He was actually feeding the bull over the fence. So the bowl actually took food out of his hand which is really nice because this is a very frightened animal," said Susie Coston, the national shelter director of Farm Sanctuary.

Frank Lee is being treated first at the Cornell University Hospital for Animals in Ithaca, and then will go on to his permanent home at the Farm Sanctuary in Watkins Glen, NY.